Plain Porridge and Side Dishes (PPSD) 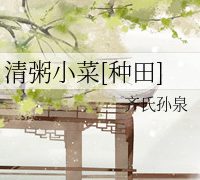 [Er Gouzi: My fourth uncle cooks deliciously, but he tastes even better]

Li Ji adopted Er Gouzi, his oldest nephew who had just been found back, but this nephew was two years older than him.

Er Gouzi was lost in the mountains at the age of 5. He came back at the age of 18. Seeing this big stomach king eating gluttonously on the table, Li Ji counted the few copper coins left in his pocket.

How can they survive?

[(Author) Solemnly declares: Er Gouzi and Fourth Uncle Li are not related by blood, nor do they have the same surname, ah~]

Due to his kindness, Li Ji took in Er Gouzi who had been lost in the mountains since he's a child. The family barely had enough to eat, but Er Gouzi's appetite was like a gluttonous ghost.

Li Ji thought that he was going to eat tree barks and grass roots during the winter, but he didn't expect Er Gouzi to have rich hunting experience. Piles of valuable leathers entered their home.

The two of them quietly earned a lot of money while planting the farmland, raising livestock, and living a prosperous simple life.

As an elder, Li Ji was not afraid of oppression nor restraint. He saved money and became a small landlord.

The author's writing is light, the characters are full of dimension. The plot line and emotional line proceeded smoothly and naturally. The writing is realistic but not boring. There's no gorgeous fanservice, but it can still grasp people's hearts between the lines, making them unable to extricate themselves after sinking in.

The author is accustomed to writing a simple beginning and a simple end. After the full novel is read, and you go to review the beginning, you'll feel that this is the best style for it.

Despite its tittle (Plain Porridge and Side Dishes), this is not a gourmet novel full of food fillers. Instead, it shows the simple but fulfilling life of two people. There's no wow-factor here, just a depiction of two people living a satisfying life together in the village (but the writing style and story telling isn't boring at all).

This is a HE, but prepare tissues for Chapter 144. It's bittersweet, but the entire novel would be missing something without it.

The last two extras got nothing to do with our two guys, but it's interesting to read anyway.

Release Schedule: All Chapters have been posted.

If you like the novel, please support the author at: