BAD Chapter 1: What if I was reborn as a dinosaur cub? 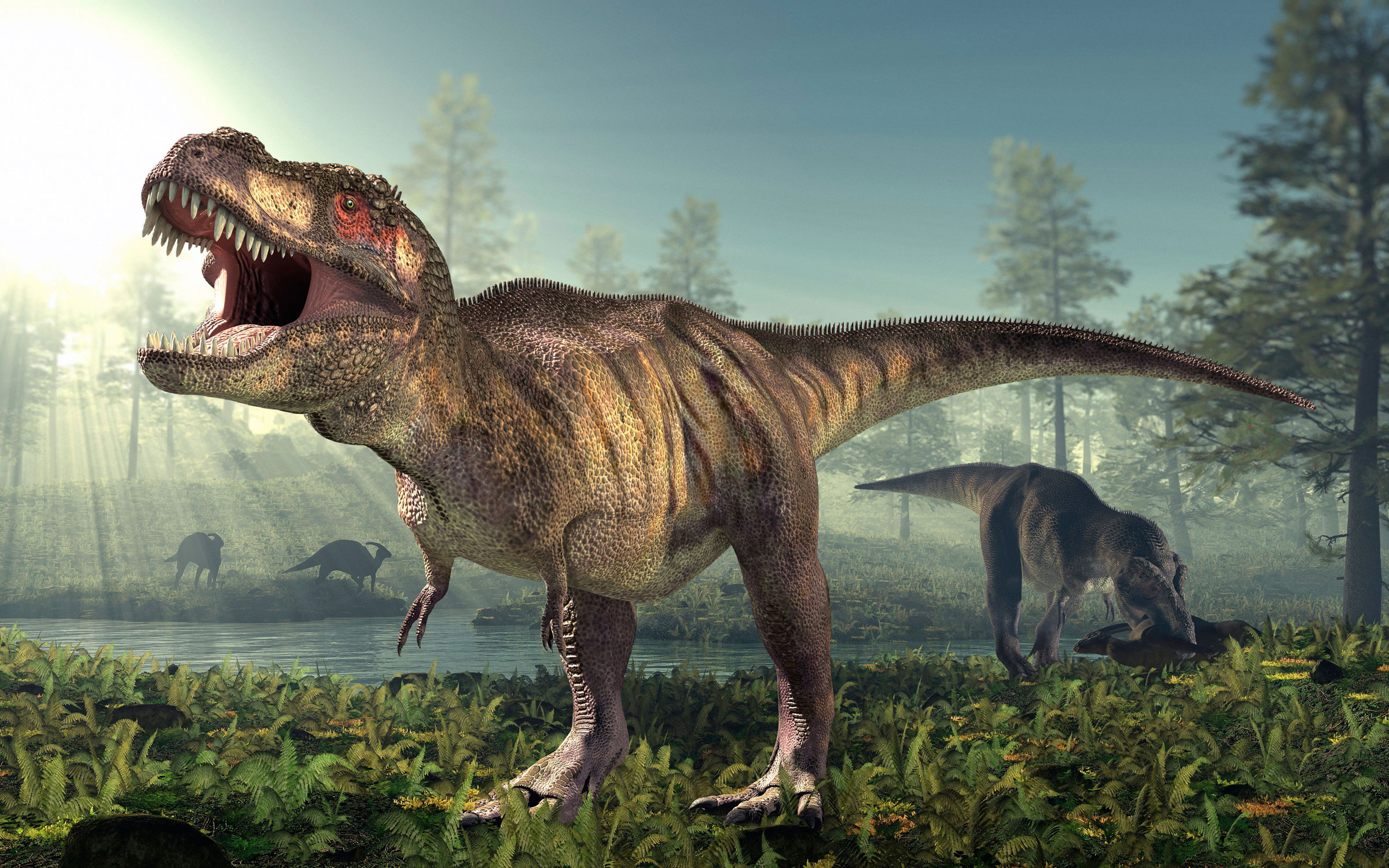 Important! Read the content below first before you start!

This is a long overdue note that I mean to put up for a while but keep forgetting. I want to save you all some time by pointing out a few things before you start (just in case this novel is not your cup of tea).

If none of these is your die-hard pet peeves, please feel free to proceed 🙂

Gu Lu slowly opened his eyes and braced his limbs. He felt that he was wrapped in a warm and sticky liquid. There was also a huge shell outside. The sunlight penetrated through the shell and shone in.

He wanted to break the shell, but he didn't know why his limbs didn't have much force and could only use his head to push against it.

He tried to call for help only to find out that as a 22-year-old adult, he suddenly could not speak any more and could only make a loud gulu sound.

However, he didn't continue to think about this issue. The top priority was to break through the huge shell and get out first.

He pushed and pushed hard. With a click, his head finally saw the light of day again. The bright sunshine was a little dazzling. Only when he saw clearly did he find that … A group of huge dinosaurs formed a circle and looked at him intently.

Gu Lu's mind was finally fully awake. He remembered that he was digging dinosaur fossils with several students in a large mine pit. When he encountered a cave-in, he protected the students and let them escaped, but he was killed and buried in it.

In fact, Gu Lu was about the same age as those students. He had a PhD in paleontology. His research on dinosaurs had gained worldwide fame and he had been employed by many famous universities as visiting professor of paleontology.

Although he was young, the students liked him and respected him very much, mainly because he could speak very professional and boring things vividly and interestingly, and his facial expression was also very high. He could also teach students Sanda, fighting and so on, and was called "the most hardcore professor". !! You are reading stolen text, if you read this at any other site besides idleturtle-translations.com. !!

Gu Lu couldn't believe it. He was reborn into the age of dinosaurs. He could study dinosaurs on the spot and didn't need instruments or machines!

As a human being, he was dead and couldn't go back, so he began to observe this new world which had great attraction to him.

He could feel the warmth of the sunshine on his body. In the age of dinosaurs, the air contained extremely high oxygen density. Every one of his inhalation brought in full oxygen-rich content.

These big guys around him, their forelimbs were a pair of sprouting little short hands. Their hind legs looked particularly strong, about 10 meters long, and their hip height was about 5 meters. They had a head length of about 1.5 meters and showed sharp fangs with amazing bite force. Those teeth really resembled veritable bone crusher, like a killing machine!

There was no doubt that these were Tyrannosaurus rex, the tyrant of the dinosaur world!

Gu Lu thought happily: I'm so lucky! I didn't just reborn, but also turned into a Tyrannosaurus rex at the top of the food chain!

All of a sudden, a male Tyrannosaurus rex stepped on Gu Lu. He was so weak now that one stomp would instantly smash him into a meat pie. Gulu stared at this horrible giant leg while shivering in fear.

The male Tyrannosaurus rex who attacked Gu Lu gave a loud roar: "Gaya, we must eat him!"

Gu Lu didn't know why this male Tyrannosaurus rex wanted to eat him. According to research, Tyrannosaurus rex would eat food of the same kind (T/N: other T. rex) , but no matter how ferocious they were, they wouldn't eat their own cubs.

Other Tyrannosaurus rex onlookers were also tempted to eat him and showed their fangs.

Tyrannosaurus rex's teeth were horrible. Each tooth was about 30 to 50 centimeters long and looked like a very sharp Mitsubishi knife. He was surrounded by numerous Mitsubishi sharp knives and trembled with fear.

The saliva of these Tyrannosaurus rex kept flowing on him, which was really disgusting. At the thought that he would die just after being born again and didn't even have time to go outside the nest, he wanted to cry until he vomited.

Countless sharp teeth bit at him at the same time. He closed his eyes in despair.

At this time, accompanied by a roar and bang bang bang, he saw the female tyrannosaurus rex hitting aside many of these males!

Then, she covered the whole nest with her body and roared with grief.

Gu Lu saw these males licking their mouths through the crack of her protection. They were ready to rush up and tear apart the female Tyrannosaurus rex.

This female Tyrannosaurus rex was also desperate to protect her cubs!!! You are reading stolen text, if you read this at any other site besides idleturtle-translations.com. !!

Gaya couldn't stop so many Tyrannosaurus rex from attacking at the same time. She let out one roar after another. The whole plains seemed to be shaking slightly. She was calling for Mungo, the only ethnic leader who could protect her children from being eaten.

Later, Gu Lu heard a more majestic and domineering roar coming from a distance, accompanied by huge and heavy footsteps.

These footsteps were getting closer and closer, shaking the whole ground just like a small earthquake. Gu Lu jolted his butt sitting on the ground. He couldn't imagine what kind of monster was heading here.

Meanwhile, those ferocious male Tyrannosaurus rex were also scared into retracting their fangs. They backed away a lot and didn't dare to continue amidst this tense atmosphere.

Because the wall of the nest was too high and too big, Gu Lu couldn't see the situation outside. He didn't see anything until the footsteps stopped. This was a particularly strong and tall male Tyrannosaurus rex!

This male Tyrannosaurus rex was simply too big compared with other males. His whole body was more than twice their size.

Gaya leaned over the nest and rubbed Gu Lu with her head very gently while pleading: "Mungo, he is my cub. Please, let him live."

Those male Tyrannosaurus rex who retreated aside muttered in a low voice: "Is Gaya crazy? He is clearly our favorite Triceratops. I really want to eat him …"

Mungo let out a loud roar and lowered his head to rub against Gu Lu, which meant that he had accepted the new member.

As the leader of the ethnic group, Mungo's majesty was inviolable. Even if these male Tyrannosaurus rex couldn't accept it in their hearts, they still had to obey it.

Gaya said happily, "Mungo, please give the children a name."

Mungo laid down and put his big head at the edge of the nest, looking at the three young ones who had just broken their shells.

At this time, Gu Lu saw his whole body from Mungo's eyes – F***, it turned out that I was a Triceratops! Triceratops was an herbivorous dinosaur and the staple food of Tyrannosaurus rex!

Tyrannosaurus rex's eyes were as big as grapefruit, so large that they could be used as mirrors. Before, those other Tyrannosaurus rex didn't lie down like Mungo to see the new cubs, so Gu Lu couldn't see his whole body through their big eyes.

Now he saw it and was so scared that he couldn't even stand!

Gu Lu saw that he was so small in Mungo's big eyes. His whole body was no more than 50 centimeters long. He had four short thick legs, a large head shield, and three small horns on his head. Only a little sharp point appeared.

He finally knew why all these Tyrannosaurus rex wanted to eat him. It was an instinct beyond control!

The reason why he hadn't been eaten was that the female Tyrannosaurus rex regarded him as her own child and had been protecting him!

One really couldn't blame Gaya for "mother's love flooding". Tyrannosaurus rex eggs usually hatched between 3-6 months. The longer the incubation time was, the lower the survival rate. Gaya only hatched three eggs after 6 months. The rest of the eggs were probably all dead. She could no longer afford to lose any more cub!

Mungo thought about their names and looked at them separately while saying, "Call them Gulu (T/N: different characters from Gu Lu), Guji, Gudong."

In fact, not only did Gu Lu have this doubt, other male Tyrannosaurus rex also couldn't understand why Mungo would allow Gaya to raise a Triceratops!

Gaya: "The names that Mungo gave are very nice! Mungo, the cubs are hungry."

Soon, all of the male Tyrannosaurus rex and Mungo went hunting together.

Gaya said to the cubs, "Mom will go find some leaves and come back to shade you."

Of course, the three cubs didn't understand. They just looked at her while making gulu noises.

Gu Lu knew that this female Tyrannosaurus rex might soon realize that he was a Triceratops. He must run away as soon as possible.

So when he saw her left, he tried his best to climb out of the nest. But it was too high for him to climb up and caused him to roll down.

The other two little Tyrannosaurus rex thought he was playing some kind of game and climbed out with him. Of course they couldn't climb out either, but they had a good time.

Most of the time, Gu Lu would be pinned down by the rolling Tyrannosaurus rex. He had to push them aside to climb again.

Gu Lu: Two heartless little things! You are playing, but I'm running for my life!

After numerous failures, he finally climbed up. The two little guys in the pit cheered for him and shouted at random: "gulu gulu, gulu gulu …"

However, Gulu who climbed up the nest was completely shocked by the sight before him!

There were huge pterosaurs flying in the sky. Not far from them were two forever inseparable friends, Camptosaurus and Stegosaurus, eating ferns. Mapusaurus was hunting the second largest Argentinosaurus, and swarms of Yutyrannus seemed to be competing for the priority of mating …

This was not ancient earth at all! It's more similar to an ancient period of another planet!

Of course, now was not the time to investigate this, he had to run for his life!

Translator's Notes: We're off to an adventurous start!

← BAD Chapter 2: Gulu is a brand of lawn mower you want to have
%d bloggers like this: