BAD Chapter 2: Gulu is a brand of lawn mower you want to have 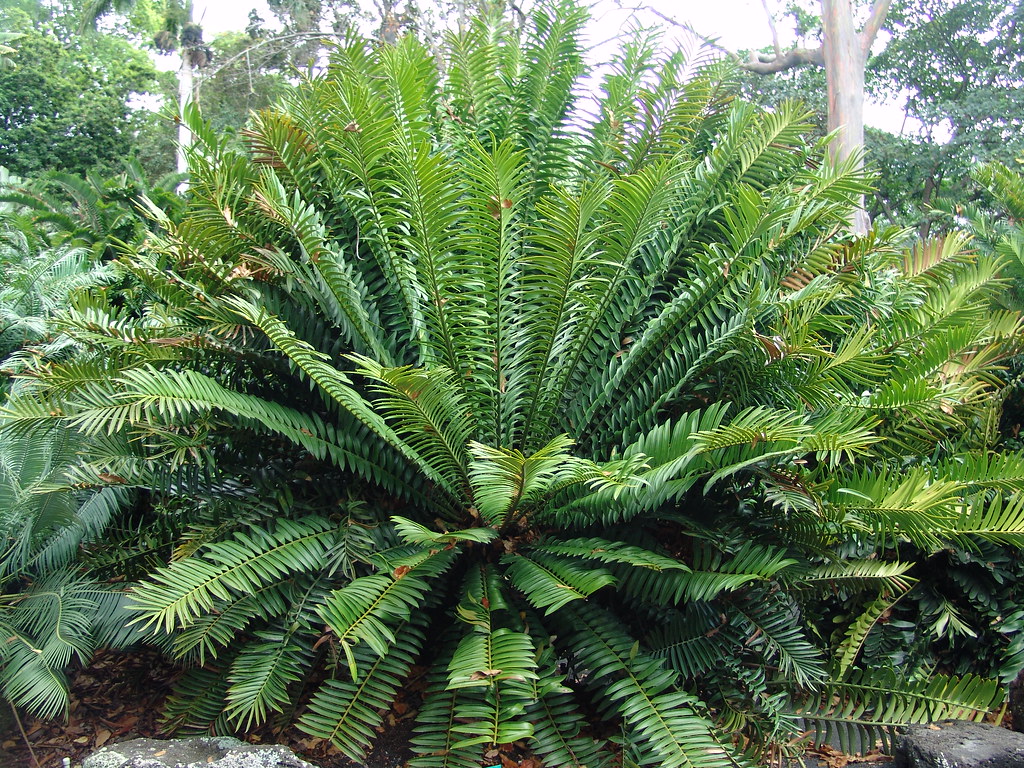 Gulu was very scared, but he still got up the courage to jump on Gaya's huge instep and rub against it. Gulu cried coquetry to please. Dinosaur cubs already had a small soft voice and didn't need him to pretend.

The weight of an adult Tyrannosaurus rex was so large that it would shake up dust with every step and make Gulu cough. !! You are reading stolen text, if you read this at any other site besides idleturtle-translations.com. !!

The nest where they were born was under a huge Alsophila spinulosa tree, which was relatively luxuriant and sheltered most of the sun exposure.

Alsophila spinulosa was the most representative plant in Cretaceous period and had the reputation of "king of pteridophytes". Alsophila spinulosa had an upright hollow stem like a pen container, with spiral leaves arranged at the top of the stem, and a canopy-like giant umbrella, which was very beautiful.

Gaya gently put Gulu back into the nest, then got down to severely reprimand:

"Gulu, do you know how dangerous it was just now! Guji, Gudong, you must also listen carefully! Don't leave this nest without my permission! You are too young, any herbivorous dinosaurs can trample you to death with one foot. Pterosaurs will take you to the sky to eat. Other carnivorous dinosaurs will also eat you. The paw of any dinosaur outside is bigger than your body …"

Although the three cubs couldn't understand her words, they all felt that their Mom was very angry and was too scared to move.

In fact, Gulu also knew that the female Tyrannosaurus rex was so angry because she was afraid of danger when he ran out.

It was then that he suddenly realized that even if he escaped from the nest of Tyrannosaurus rex. Without the protection of Triceratops, it would be impossible for him to live half a day! If he didn't get trampled to death by herbivorous dinosaurs, he would certainly be eaten by carnivorous dinosaurs!

As a paleontologist, he shouldn't have made such low-level mistakes. However, he was too afraid of being eaten by Tyrannosaurus Rex and didn't think of them.

Gaya's lecture lasted for a long time. The three little ones didn't understand much of her words. Every time Gaya named and criticized specific cub, she would rub the cub to get its attention. Since they were so frequently called out like this, the cubs all learned their names!

Gu Lu: Gulu? My name is Gulu? I refuse this name! I can't just be called Gulu because my voice sounds like gulu. It's too casual!

The sun was too large. After training, Gaya hurriedly moved the cubs to the nest nearby.

The nest was under a denser Alsophila tree and had been padded with a layer of giant cycad leaves at the bottom of the nest. These cycad leaves also covered half of the nest opening. The young cubs could stay cool when hiding inside them.

There were still nine eggs that hadn't hatched in the original nest. Gaya also covered them with cycad leaves to avoid sun exposure.

After such a long ordeal, Gulu was tired. He was just about to get down to rest when Guji suddenly hit Gudong aside and laid down beside him. Guji kept rubbing on him and said, "gulu gulu, gulu gulu…"

In this way, Guji and Gudong didn't give way to each other. Both of them wanted to be close to Gulu.

Gulu's face was bewildered. He didn't know why his two younger brothers had to be next to him. In order to stop his younger brothers from making noises, he laid in the middle of the two little guys. !! You are reading stolen text, if you read this at any other site besides idleturtle-translations.com. !!

Guji and Gudong found out that Gulu was so smart. Now they could both be next to him. They rubbed Gulu happily with their heads.

After such a tumult, Gulu felt even more hungry. He wanted to eat the cycad leaves lying at the bottom of the nest so badly that his saliva kept flowing out.

As a human being, Gu Lu was an orphan. He had never felt a mother's love, but unexpectedly he felt the softest maternal love in a Tyrannosaurus rex, which was famous for its ferocity.

Although Gulu wanted to eat cycad leaves very much, he refrained. He didn't want to remind the only female Tyrannosaurus rex that could protect him that he was actually a plant eater.

Soon Mungo brought back half a head of Protoceratops. He placed his prey in front of Gaya and then left.

The plump smell of meat and blood aroused Guji and Gudong's bloodthirsty and cruel nature. They were tearing and yelling fiercely, but because the newly hatched Tyrannosaurus rex was less than 50 centimeters long and too small, the fierce shouts seemed just like milky cries.

Gulu didn't like the smell of blood, but in order to make himself a little bit like Tyrannosaurus rex, he also learned to bite and roar like his younger brothers.

Gaya was hungry, but she was not in a hurry to eat herself. Instead, she bit the meat and fed it to the cubs in the nest.

With a click, a large pile of minced meat fell in front of the three cubs. Gulu dived into the meat pile to eat like his younger brothers.

Gulu, as an herbivorous dinosaur, of course, didn't like meat. He just pretended to eat like crazy. In reality, he just pushed the meat around his mouth then spit it out when the female Tyrannosaurus rex was not paying attention.

At the same time, he would pretend to eat too hard when biting his meat that he chewed off the cycad leaves pad at the bottom of the nest. He was very happy every time he ate a mouthful of cycad leaves.

Gulu: The cycad leaves are too delicious!

Soon, piles of minced meat were all eaten. Most of the cycad leaves at the bottom of the nest were also chewed out by Gulu.

The two little Tyrannosaurus rex ate until they had round bellies. When they were full, they would lie down beside Gulu and take a nap.

Gaya watched the cubs fall asleep before eating herself. After she finished, she also took a nap beside the nest.

Gulu was very hungry. These cycad leaves simply couldn't be eaten enough. He wanted to relieve hunger through sleep, but obviously this was not practical. He couldn't sleep when hungry!

The competition in the age of dinosaurs was very fierce. Small dinosaurs had to eat a lot to maintain their body needs after breaking their shells. Gulu knew that he had to find a way to fill his stomach, or he would starve to death before being eaten by Tyrannosaurus rex.

Of course, it was still very difficult to climb out. After numerous failures, he finally climbed out.

Fortunately, the ground was covered with ferns next to the nest. He rushed in and ate them. Soon he ate all of the ferns closest to the nest.

Looking at the ground that had been shaved by himself, Gulu sighed, "I can eat so much!" He was simply a super-powerful "lawn mower"!

Gulu, who was eating too fast, didn't even notice Mungo, the male Tyrannosaurus rex, watching him from a distance.

Finally, the full Gulu slipped back to the nest to sleep. The sleep was very sweet until it was woken up by the continuous fighting and roar.

Soon the fighting burned to Gulu. They would step on Gulu or hold down Gulu carelessly when fighting too hard. Gulu couldn't bear it and join their fight.

Gaya watched the three cubs fight. Not only did she not stop them, she even gave them advice: "Gulu, bite the neck of Guji! Guji, grab Gudong's eyes with your claws, the eyes are the most vulnerable! Gudong, bite Gulu butts ah. Butt meat is the best to bite …"

The two young Tyrannosaurus rex's teeth were not sharp enough. Triceratops' skin was very thick, so he was not injured. Soon after the fight, they rolled into a ball in the nest to play.

For the next half month or so, Gulu tried to survive in this way, pretending to be a little Tyrannosaurus rex, eating meat, fighting and sleeping with Gudong and Guji, but also secretly went out to eat ferns.

Gulu found himself eating more and more. He was eating bald all ferns around the nest.

Fortunately, during the Cretaceous period, ferns grew very fast. A new crop of ferns could grow in two or three days from the area he ate bald.

That night, Guji and Gudong were already asleep. Gulu was really hungry and couldn't sleep at all.

Gaya noticed that Gulu was still awake. She rubbed him and said, "Gulu, go to bed quickly. You can grow faster by sleeping more. Mom has to take care of your younger brother and sister who have not yet hatched. You must sleep well."

Now the three cubs had been able to make some simple communication.

After a while, Gulu began to climb outside the nest.

He finally climbed out after countless failures. He seemed very sad to see Gaya lying on the nest nearby. The faint blue sky was shining on her and on the basketball-sized dinosaur eggs that had not yet hatched.

Gulu speculated that Gaya might be upset because these eggs had not hatched. The success rate of these Tyrannosaurus rex eggs was extremely low.

He knew that he couldn't comfort Gaya. He needed to hurry back to his nest after eating so that Gaya wouldn't have more to worry.

So he rushed into the fern plant and began to eat wildly. Soon he ate a bald patch of land.

When he was ready to run back after being full, a huge monster suddenly jumped out of the darkness. He was instantly pinned to the ground with huge, hard claws.

In the age of dinosaurs, as long as the carnivorous dinosaurs pressed a prey under their claws, the chance of survival was basically equal to zero.

← BAD Chapter 1: What if I was reborn as a dinosaur cub? ← BAD Chapter 3: Some dinosaurs like to send their own dinosaur heads from thousands of miles away
%d bloggers like this: