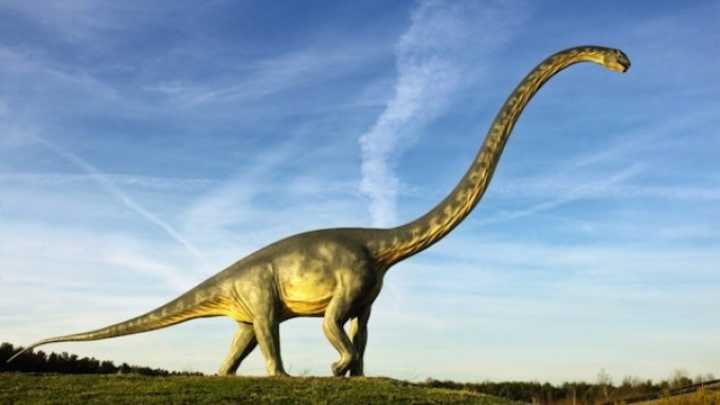 Gulu looked at Guji and Gudong. His two younger brothers were very hungry now. They looked at him with extremely cruel and bloodthirsty eyes of carnivorous dinosaurs hunting their preys, making him shudder.

Guji stretched his neck to smell Gulu. Gudong had already opened his mouth full of fangs.

Gulu was scared to retreat and fell into the water with a loud splash. While swimming, Gulu thought to himself: Am I just "washing vegetables" for my younger brothers? It's just right to eat after being washed! !! You are reading stolen text, if you read this at any other site besides idleturtle-translations.com. !!

Guji and Gudong jumped on Gulu at the same time. They couldn't help licking him. It's really like washing vegetables …

On the other side, Mungo and Gaya found the cubs out of sight and started looking for them separately.

When Mungo found the pool, Guji and Gudong ate with their mouths full of blood and meat residue. They excitedly called out, "Mungo, it's delicious!"

Looking at this scene, Mungo's head buzzed. Gulu disappeared! What were these two cubs eating?! They're still so small. What could they hunt for?! Should it not be …

He shouted angrily at the two little guys, "Have you eaten Gulu?！"

Gudong and Guji's mouth were full of meat and they couldn't speak for a while. They shook their heads and denied, "No, no, absolutely not!"

Gudong and Guji looked at the ferns bushes nearby.

Not far away, Gulu was eating fern plants. Because fern plants were too luxuriant, they entirely covered the small Gulu, making him difficult to be seen.

After hearing Mungo's voice, Gulu raised his head and ran to Mungo. He flung himself on Mungo's back paws and said excitedly, "Mungo, Mungo, why are you here?"

Gulu also didn't know what's wrong with him. Anyway, since Mungo watched Ulam with him for many days, he liked to stay with Mungo. Now he's as close to Mungo as Gaya.

Mungo knew that a Tyrannosaurus rex couldn't control its nature to eat herbivorous dinosaurs, especially prey such as Gulu, which had no resistance.

As Guji and Gudong got bigger, they would become more and more uncontrollable and want to eat Gulu, which was normal.

Mungo: "What are you eating?"

Guji and Gudong looked at the remnant snake skin on the ground and said, "We are so hungry that we caught a snake to eat."

Mungo scratched the snake skin with his claws. Just now he was too anxious and lost his mind. He didn't notice these details.

In order to cover up the embarrassment, he severely reprimanded the three cubs: "who let you come so far to play?! Do you know how dangerous this is? Don't hurry back with me! Do you know how worried Gaya is …"

The three cubs were frightened by Mungo, who appeared very angry. They followed behind Mungo and walked to the nest while listening to the training.

On the way back, Gulu thought a lot.

After Guji and Gudong licked him for a long time, Gulu still felt frightened even though they refrained from eating him or even biting him.

Today's action reminded Gulu that the hunting instinct of the two younger brothers had been stimulated and would become more and more dangerous. No matter how cute they were when they're full. One they became hungry, they may not be able to help eating him. He must be careful in the future.

When the three cubs returned to the nest, Gaya also returned. She heard Mungo's roar, knew Mungo found the cubs, and went back to the nest to wait.

Of course, Gaya also severely reprimanded the three cubs. Gaya spared them only after the cubs repeatedly promised not to run away to play.

After the training, the three cubs soon ran to play in another place. Gulu felt that his heart was really big. His younger brothers wanted to eat him during the day, but now he's not afraid of the two cubs at all.

Guji rubbed Gulu's head and said, "Wow, brother, your head shield looks so good. When will I grow mine out?"

Of course, Guji and Gudong had eaten the meat of Triceratops, but it was all gnawed and fed by Gaya. So, they never saw the original shape for a long time.

Gulu fondly looked at the two little fools and said, "I'm not strong enough. You can still be strong without a head shield like mine …"

Mungo watched the three cubs play so happily that he didn't know whether his worries were unnecessary.

Because they felt too tired from playing during the day, the cubs didn't bother Gaya any more after nightfall. Guji and Gudong fell asleep while holding Gulu after a while.

Gulu was still awake. He looked at Gaya's big head, which was already asleep at the edge of the nest.

This nest was very deep. He, Guji and Gudong slept in the innermost part against the wall. In the past two days, he began to grow horns and felt a little itchy. When they slept, he would grind horns on the wall unconsciously. The next morning, Guji and Gudong's heads were full of shavings from his grinding.

Gulu felt that there's no place more reassuring than this nest.

Lying on your back, you could see the bright sky overhead. The Cretaceous stars weren't much different from the modern ones, but cleaner and clearer. Like washed, the major galaxies being clearly visible.

In the distance, there were all kinds of dinosaur roars and heavy footsteps, but they didn't feel horrible at all. They're more like movements in a dream.

At noon the next day, the three cubs were brought to the hunting scene in a daze before they woke up. Mungo intended to start training their hunting skills. Observation was a very important way of learning.

Although Guji and Gudong would become more and more dangerous to Gulu after they started practicing their hunting skills, Mungo couldn't help it. Tyrannosaurus rex cubs must watch the hunt when they're 3 months old. This was the rule of life.

The three cubs woke up immediately. They saw a group of Mapusaurus hunting a Diplodocus in the valley.

Although a Diplodocus was not as big as an Argentinosaurus, it's also a monster. Adult Diplodocus grew over 30 meters long. Because of its light skeleton, it only weighted about 15 tons, but its tail was very destructive. It's generally not a good prey to hunt.

This group of Mapusaurus had almost succeed in hunting it though. The Diplodocus was in its final struggle. It's foreseeable that the Diplodocus would soon fall to the ground and be eaten.

Mungo: "Gaya, you wait here with your babies. Munroe, stay with Gaya."

Munroe was Mungo's younger brother and the male Tyrannosaurus rex that almost trampled Gulu to death with one paw when he first cracked the shell.

Therefore Gulu was very afraid of being killed by him.

Munroe had always disliked Gulu very much and wanted to eat Gulu every day. He couldn't understand why elder brother indulged Gaya in raising a Triceratops.

Mungo had deliberately kept Munroe and other male Tyrannosaurus rex away from Gulu before, but today he uncharacteristically asked him to take care of the cubs.

Mungo took the rest of his brothers and rushed at the prey.

Hiding there made Gulu feel safe. He began to focus on how Mungo took his brothers to rob Mapusaurus of meat.

When Mungo and his brothers rushed down, the Mapusaurus group also succeeded in bringing down the Diplodocus.

Mapusaurus: The robbers come too soon! We haven't had time to take a bite!

In the heart of the Mapusaurus, these adolescent Tyrannosaurus rex were bandits who came to steal their meat!

The head of the Mapusaurus dinosaur group was very angry. He decided to be tough for once. This time, these Tyrannosaurus rex must know their prowess!

Tyrannosaurus rex, no matter how powerful, couldn't hold up a large number of Mapusaurus.

Gulu's two hind paws tightly grasped the ground. He was very afraid of Mungo's injuries and his brothers' injuries. When hunting, one less helper greatly increased the danger.

Translator Notes: I have reached my personal goal of mass releasing ten chapters. From now on, I will try to get out one chapter a day.

Important – Please Read: Would anyone be interested in pooling for sponsored chapters? Each extra chapter would be ~20 – 30 dollars. Please comment below to let me know.

BAD Chapter 11: The cruelest Tyrant but the[…]

← BAD Chapter 9: Do you want to eat Gulu? ← BAD Chapter 11: The cruelest Tyrant but the gentlest Father
%d bloggers like this: