BAD Chapter 11: The cruelest Tyrant but the gentlest Father 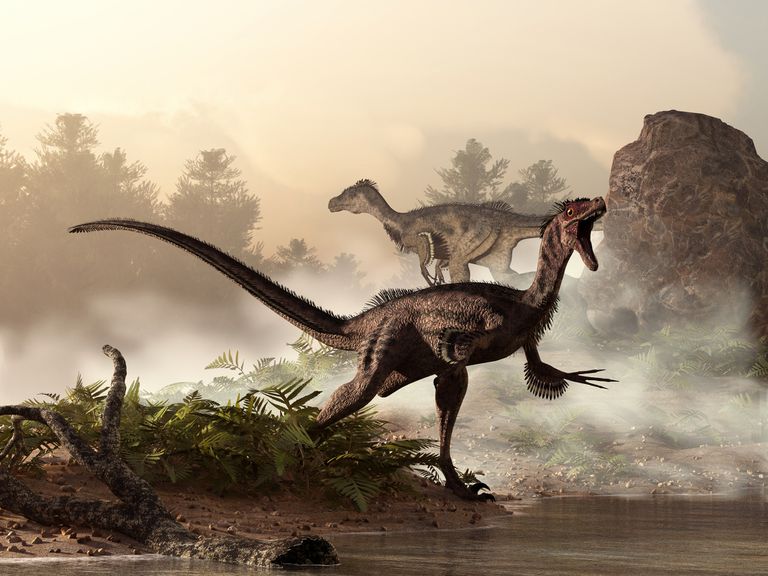 However, Gulu's worries were superfluous.

When the Mapusaurus leader saw Mungo coming, he turned and ran.

Since the leader already ran away, other Mapusaurus also quickly turned around to escape. Because they ran too fast, several Mapusaurus tripped over their companions. They quickly jumped up and continued to flee.

Mungo stood in front of the prey and let out a roar that shook the valley. The Mapusaurus ran faster. !! You are reading stolen text, if you read this at any other site besides idleturtle-translations.com. !!

Gulu was very sure that Mungo scared off the Mapusaurus dinosaurs. Mungo really deserved to be the "Grim Reaper" of Yukan. Which dinosaur wasn't afraid of him?

Munroe: "Go eat meat, my older brother is the most powerful!"

Munroe: "Gulu need not go, he will always only eat those terrible ferns!"

To tell the truth, Gulu was very sad because Munroe was indeed right.

Gulu had been avoiding this problem for a long time. He's a Triceratops but lived in the Tyrannosaurus rex population. This wasn't a long-term solution.

Although Gaya and Mungo gave him enough security, no one could guarantee how long this "security" would last.

Guji and Gudong also hurriedly helped Mom to comfort their brother: "Our brother is the best. Munroe is a big bad guy …"

Gulu didn't want Gaya and his two younger brothers to feel sad. He lifted up his head and shouted, "I won't care about him. I'm going to be the best Tyrannosaurus rex!"

While growling, Gulu rushed toward the prey. Gaya, Guji and Gudong followed behind.

Gulu pounded on the Diplodocus's thigh like Guji and Gudong. This kind of prey that still lived was the best to eat. Its meat tasted delicious, tender and smooth, and its fishy smell was not heavy. Some meat would pulse when entered the mouth.

Gulu thought it was incredible. As a human being, he should think it's cruel to eat living meat. As a Triceratops, he shouldn't think meat was delicious.

In fact, he didn't think the meat tasted delicious, but compared with the dead prey, the ones that didn't die tasted better. Those that died for an hour or two were better to eat than those that died for half a day or two.

After eating so much meat, Gulu could already tell how long the prey had been dead by its meat and blood smell.

Not far from the valley, a group of velociraptors were eating half a head of Stegosaurus, which had already rotted so badly that it was covered in white, fat and wriggling maggots, and the bones were blackened!

Gulu was the first time to see such rotten prey. It's really a little disgusting.

The young Tyrannosaurus rex and the female Tyrannosaurus rex stood in front of their seriously decaying prey. Obviously, they were also a little unable to swallow them down their throats and still hesitate whether to eat them or not.

Tyrannosaurus rex would not normally eat prey rotting to this extent.

Gulu knew that in the age of dinosaurs, the food of carnivorous dinosaurs was not easy to come by, and it was normal for many dinosaurs with poor hunting ability to eat carrion.

Mungo never let them eat rotten meat. Every time, Mungo brought back fresh meat, either fresh from hunting or dead for less than half a day.

Other Tyrannosaurus rex normally alternated between having full meals and being hungry. There were those that died of starvation or during hunting.

Unlike their group. They ate fresh meat every meal, which was very rare in the whole continent of Yukan. They could be called the "top giants" of Yukan.

Of course, they could only become the "top giants" because of Mungo.

Mungo was "notorious" in the continent of Yukan. He had never been soft in robbing all kinds of carnivorous dinosaurs.

If the robbed carnivorous dinosaur resisted a little, Mungo would surely let it die on the spot. When hunting herbivorous dinosaurs, he was even more ferocious. As long as he was attracted to the prey, it couldn't survive.

This group of Mapusaurus dinosaurs who were robbed today were very good at "watching dinosaurs prescribe drugs". If they encountered other Tyrannosaurus rex groups instead of Mungo's, they would definitely be tough to guard their prey.

After eating the meat, Mungo and Gaya returned to the nest with their young cubs.

To Gulu's surprise, Mungo also let his brothers come back with him.

Previously, Mungo had purposely prevented these male Tyrannosaurus rex from returning to the vicinity of their nests, for fear that they would eat Gulu.

Gudong and Guji played around Gaya when they were full. Gulu only pretended to eat meat, so he was still hungry.

Gulu ran to the side and ate the fern plant.

Eating and eating, Gulu saw the fern vegetation in front of him flying in the wind, and the wind was very strange. Only a small area in front of him had wind, which was unnatural.

Then he immediately responded. It was not wind but the snorting of some big guys.

Before he could run, the big guy leaned out of the thick fern plant and whispered harshly, "Don't shout, or I'll eat you!"

Gulu sat down on the ground in terror. In front of him were two giant Tyrannosaurus rex, one was Munroe, the other Moluo.

Moluo was a very powerful Tyrannosaurus rex in Mungo's ethnic group and his best assistant. If Moluo didn't follow Mungo, he would certainly become a powerful ethnic leader like Mungo, but he was willing to surrender to Mungo.

If Mungo was the leader, then Moluo was the second in command of the ethnic group.

Moluo said in a low voice: "Gulu, for such a long time, I think you must have found that you are different from us. You like to eat fern plants. Tyrannosaurus rex does not eat these. You are not a Tyrannosaurus rex, but a Triceratops … I advise you to run away as early as possible, or you can wait to be eaten by us when you grow up!"

Close contact with two Tyrannosaurus rex without any kindness made Gulu very afraid. He trembled and couldn't say a word.

Munroe: "Are you dumb? Nod if you understand."

Gulu was just about to nod crazily when a roar came from behind him. He looked back and saw Mungo staring angrily at Munroe and Moluo.

Mungo's appearance was like the golden light of the "savior" coming, giving him a golden thigh "Dad"! (T/N: a backer)

In fact, Gulu's sobs and plays were too few, which made him unskilled in acting.

Mungo was very angry. He shouted at Munroe and Moluo. The two bowed to Mungo's majesty and fell down one after another.

As he spoke, Mungo himself sank down and ate the fern plants in a big gulp. Although he felt they tasted very bad, he swallowed them all. He really didn't know any other way to coax children.

Munroe: My brother must be crazy!

Moluo: The boss has really gone all out.

Gulu was dumbfounded. He couldn't believe that Mungo was trying to make him happy.

To Gulu's surprise, Mungo ordered his two brothers, "You too! Fern is the best food! Eat quickly!"

Munroe and Moluo froze. Mungo stared at them. The two quickly sank down to eat ferns. Although they felt nauseous, they still swallowed them.

At this time, Gulu actually wanted to say, "Mungo, it's not necessary, you really don't have to …"

The other male Tyrannosaurus rex didn't know what happened, but they never dared to disobey Mungo's orders, so they ate fern like Munroe and Moluo.

Mungo laid down and told Gulu, "Gulu, you see, Tyrannosaurus rex likes to eat ferns. We all like to eat."

Other Tyrannosaurus rex: Boss, you have gone too far!

Then Mungo said, "Come on my head. I'll take you to eat leaves."

Gulu liked to eat leaves best. The higher the leaves, the more tender and juicier they tasted. They were better than ferns. He crawled onto Mungo's head and shouted, "Eat leaves, I like to eat leaves best, delicious …"

In fact, Gulu didn't know what's wrong with him. After he became a Triceratops cub, he became very childish. Most of the time he talked and did things without using his brain, probably because he was assimilated from playing with those two cubs, Guji and Gudong, all day long.

After Gulu and Mungo left, the rest of the male Tyrannosaurus rex dared to spit out the fern plants they ate.

Enraged, Munroe stepped on the spit-out fern plants and said, "It's really disgusting! This is disgusting! My brother is crazy! I have to eat that Gulu today. Who dares to go with me?"