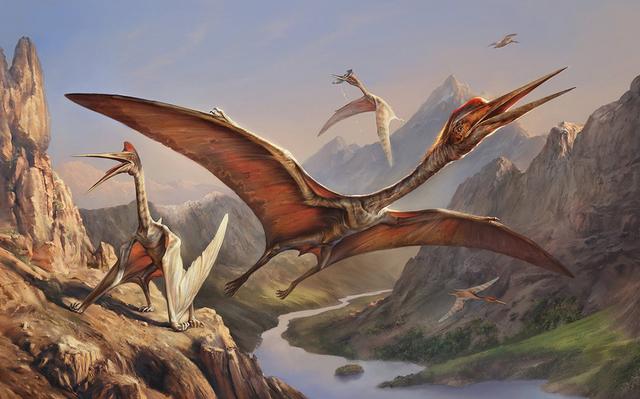 Munroe's call didn't receive any response from the other male Tyrannosaurus rex, which made him even more angry. He shouted, "what are you afraid of?! He is a Triceratops cub! Triceratopses are our food!"

Moluo: "Isn't Mungo protecting him now? Let's wait for a while. Mungo will wake up one day. We can then eat him alive!"

Munroe: "Are you all afraid of Mungo? I'm not afraid!"

He rushed into the forest as soon as he spoke, but he came back after two steps and grumbled, "Forget it, I'll eat him another day! I have no appetite today! The fern plants taste so bad. I'm going to drink water!"

The rest of the male Tyrannosaurus rex: …

Gulu, who was carried by Mungo's head, ate whatever leaves he wanted. He's only too happy to eat the tender, delicious and juicy bud on the top of the tree.

After eating, Gulu laid on Mungo's big head and reposed. He didn't have to worry about falling down.

Mungo's head was very big compared to Gulu's size now. Lying on it was very spacious. Secondly, Mungo's balance was very good. Whether running or walking slowly, lying on him felt like being on the ground.

Gulu thought to himself: Mungo is really my 24-karat solid gold thigh. He's a real dad! Other male Tyrannosaurus rex don't like me and want to eat me. I can't win. But Mungo will punish them to eating fern plants. Ha, ha, ha, ha. Look at how painful they ate. See if they still dare to bully me. Humph …

Mungo paused and said, "I'm not your father. Don't shout."

Gulu hurriedly explained, "I know, I called you Dad because you would protect me, just like a very powerful father!" !! You are reading stolen text, if you read this at any other site besides idleturtle-translations.com. !!

In fact, what Gulu wanted to explain to Mungo was that in the human world, a man as powerful as him was "father". Ah! Like Ma Yun's father. (T/N: a very strong figure? Not sure what this means.)

Gulu thought to himself: Stingy. Because you are still an adolescent and hasn't found a female Tyrannosaurus rex, are you afraid that you can't find one if I call you Dad?! Still shout, still shout! You are so strong. Even if you are a "child care provider", you're also a popular item. Are you still afraid of not finding a female Tyrannosaurus rex?

So Gulu called: "Dad, Dad, Dad … Mungo is my Dad. My Dad is the most powerful Tyrannosaurus rex in the whole continent of Yukan. I think whoever dares to bully me will be eaten alive by my Dad. Humph …"

On the way back to the nest, Gulu kept shouting this, regardless of whether Mungo agreed or not.

Mungo seemed to get used to it after listening for a while. He even felt a little happy to be praised like this by Gulu.

Since then, Mungo had not deliberately separated his brothers from Gulu, but with the last "eat fern plant warning", these male Tyrannosaurus rex never found trouble with Gulu again. Even if Mungo wasn't present, they still refrained for fear that Gulu would complain to him.

Therefore, Gulu's life could be said to be carefree, except for the two difficult brothers.

As Guji and Gudong grew older, they wanted to "explore" farther and farther away every day. Tyrannosaurus rex's genes were inherently engraved with this unstable risk factor, so it's impossible to quiet them down.

Gaya could not guard them all day long. She also needed to go out hunting. After all, she couldn't rely on Mungo forever. Otherwise, Gaya's hunting skills would be seriously degraded, thus increasing her danger of dying.

Gaya's spouse was dead. Mungo was Gaya's younger brother. Although the situation of a younger brother raising his elder sister was rare, it's not without precedent.

On this day, Gaya went out hunting and let the three cubs play near the nest. Don't run away. Guji and Gudong agreed well. But Gaya wasn't gone for long before the two cubs ran to the forest.

Gulu followed his two younger brothers closely and kept telling them, "Don't run too far this time, Mom will worry!"

Guji: "Brother, Mom won't know. I really want to take a look in the forest. It must be very interesting."

Gudong: "Uh-huh, I also want to go. We must come back before Mom finds out! Brother, don't worry!"

The three ran for a long time but didn't reach the supposedly nearby forest.

Guji and Gudong sat on the ground panting while kicking the ground: "Brother, why does the forest look so close, but we always can't get there? I'm so angry, wu wu, I'm going to let Mungo eat it!"

Gulu was almost amused to dead by his younger brothers. The two cubs didn't know that the forest was neither a prey or alive. Mungo couldn't eat it.

Now the body shapes of Guji and Gudong had grown up a lot, especially their hind legs. They were already very strong. The two strong hind legs were pedaling hard on the ground. The lush fern plants had been pushed out by two grooves, with the soil dirt below flying wildly.

Gulu patiently explained to the cubs, "In a particularly open place, when your destination is very large, it may look very close, but is actually very far …"

Although Guji and Gudong didn't understand everything clearly, what their brother said sounded very fierce. They kept nodding and saying, "Wow, my brother knows a lot, my brother is really fierce …"

Suddenly they heard sounds of heavy footsteps not far away, which were getting closer and closer to them.

Such huge footsteps must belong to a particularly large herbivorous dinosaur.

It's too dangerous if Guji and Gudong were found. These large herbivorous dinosaurs usually killed the cubs of carnivorous dinosaurs in order to prevent these cubs from eating them when they grew up.

Guji and Gudong immediately stood up and dashed off. Gulu brought up their rear while looking back from time to time to "investigate the enemy's situation."

After a long run, Guji and Gudong stopped suddenly. Gulu had no time to "brake" and hit his younger brothers. The three cubs rolled out of the lush fern plantation.

They were all shocked by the sight and couldn't close their mouths.

This place was an endless piece of sand, to be exact, an endless "egg laying center"!

According to Gulu's visual inspection, the egg-laying center was at least 18 kilometers long with dense nests and tens of thousands of giant dinosaur eggs. It could be said that each walking step would fall on an egg.

Gulu couldn't imagine how horrible it would be if so many dinosaur eggs hatched. Other dinosaurs wouldn't survive. What kind of dinosaur had such a strong egg-laying ability?!

Then Gulu saw a sign that an egg was breaking. Soon, a small dinosaur burst out of its shell. Because the dinosaur was too small and a little far away, Gulu couldn't immediately recognize its type.

A Chaoyangopterus was attracted by the easy-to-sneak-attack spawning ground and landed in front of the newly-hatched small dinosaur, picked up the small dinosaur and prepared to fly away.

At this moment, a group of bigger dinosaurs came by. The Chaoyangopterus was frightened and dropped the cub in its mouth to escape.

Although Tyrannosaurus rex was a carnivorous dinosaur, Guji and Gudong were still too young. They would instinctively stand by small dinosaurs like themselves and didn't want these little ones to be eaten.

However, "Mom" grabbed the neck of the small dinosaur in one bite and flung its body toward the ground. The little dinosaur was killed instantly, then the big dinosaur ate its body in one gulp.

Gulu knew that these big dinosaurs were Skorpiovenators and couldn't be the parents of these little cubs!

This group of Skorpiovenators ate crazily in this huge egg-laying center, swallowing eggs and newly born small dinosaurs in an instant.

Just as Gulu was worried about whether the Skorpiovenators wanted to finish the egg-laying center completely, their real parents came back!

The real parents of these cubs were Argentinosaurus weighing up to 100 tons, while the newborn cubs weigh only 5 kilograms.

The cubs of these Argentinosaurus were small and adorable. But in 40 years, they would grow from 5 kg to 100 tons. At their growth peak, their weigh could increase by 80 Jin a day!

It's no wonder that Gulu didn't recognize them. They just looked too different from their parents.

Skorpiovenators were too small compared to adult Argentinosaurus. The parents of the little Argentinosaurus chased them away like flies and trampled many of them to death for revenge.

Gulu knew that these adult Argentinosaurus were too dangerous. He ran home with his younger brothers and didn't dare to look back.

But it didn't take long during their escape to meet a fatal danger – Velociraptor!

Gulu knew that they had no ability to protect themselves.

At this moment Gulu saw the Stegosaurus nearby! This let him find a glimmer of hope! Although it's very likely that they might also be trampled to death by the Stegosaurus.

He called out to his younger brothers, "Run quickly! Follow me!"

Gulu and his brothers rushed into the Stegosaurus group.

T/N: I just noticed some really off putting quotation marks! They just floated off to the side. I already went back and fixed them. Please let me know if you see anything strange (ex: formatting issues, etc.) on the posts.

BAD Chapter 11: The cruelest Tyrant but the[…]

← BAD Chapter 11: The cruelest Tyrant but the gentlest Father ← BAD Chapter 13: Your good friend Gulu the Little Devil is now Online
%d bloggers like this: