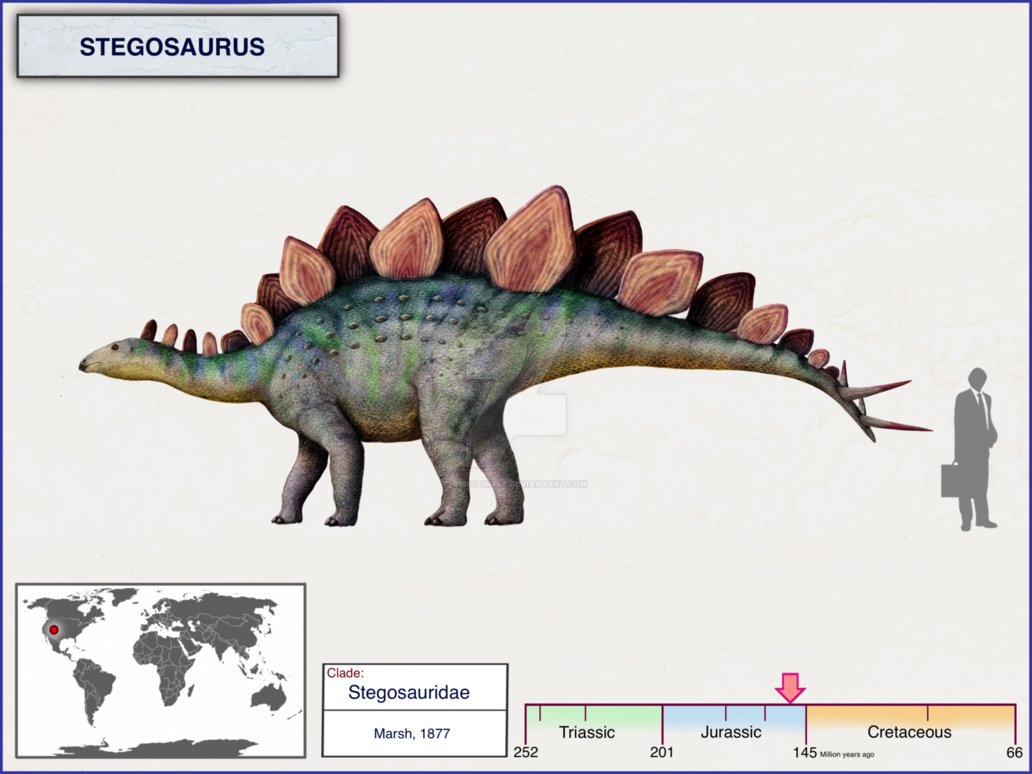 Note: The term "sub-adult" has been changed to "adolescent". Ex: sub-adult T. rex to adolescent T. rex. Both refer to a T. rex who is older than a cub but younger than an adult (like Mungo).

Stegosaurus stood 12 meters long, 7 meters high and weighed 4 – 6 tons. It had a huge bony plate on its back and four sharp spikes on its tail. The spikes were mainly used to defend against attacks by carnivorous dinosaurs and were very powerful.

Gulu, Guji and Gudong were too small to attract the attention of these Stegosaurus. They carefully shuttled through the Stegosaurus group. The three of them could be trampled to death if caught. !! You are reading stolen text, if you read this at any other site besides idleturtle-translations.com. !!

Gulu warned his younger brothers, "Be careful, don't get stepped on!"

Guji and Gudong had never experienced such horrible things before. The words just fell from Gulu's mouth when the big foot of a Stegosaurus almost dropped on the two little guys. Gulu jumped to hit his two younger brothers.

The three of them tangled together and rolled to the side. At the same, the Stegosaurus's big foot just landed beside their heads. Guji and Gudong immediately cried out: "Elder brother, elder brother, how terrible …"

Gulu stood up to rub the heads of the two little guys and comforted, "Don't be afraid, run, avoid these big feet, and we will survive!"

Guji and Gudong quickly got up from the ground and ran behind Gulu. Stegosaurus's heavy body and big feet raised high dust on the ground. The three choked and kept coughing. They were soon covered with dust.

Velociraptors used their small size and quick actions to rampage through the Stegosaurus group. In the end, they realized that instead of trying so hard to catch these three small dinosaurs that they finished in a few bites, they might as well eat a small Stegosaurus!

These Velociraptors completely angered the Stegosaurus group after replacing their hunting targets with small Stegosaurus.

Gulu saw the large bone plates on the Stegosaurus back gently fanned up. Blood circulated toward these bone plates turning them into horribly bright colors!

The large bone plates in the back row of Stegosaurus were mainly for showing off and threatening. Usually, the bone plates were the same color as the body. When the bone plates became bloodshot, they would appear colorful.

Velociraptors did feel really afraid, staring at the Stegosaurus discoloration of bone plates without daring to move.

Gulu: This is simply an act of magic!

Then the Stegosaurus started waving its tail to drive away the Velociraptors. The four one-meter-long bone spurs on the Stegosaurus's tails acted as their deadly weapons. If hit by them, even a Tyrannosaurus rex would die.

Gulu ran across the Stegosaurus group with his two younger brothers, but they didn't have to worry about being hit by these bone spurs because they were too short and too small for them to hit.

There was a loud bang and a Velociraptor was swept by the tail of a Stegosaurus. The powerful impact sent the Velociraptor flying.

Gulu watched the Velociraptor about hit them. He desperately escaped with his two younger brothers. If they hadn't run fast, they would have been killed by the body of this Velociraptor … In the end, it just landed at their feet.

Several large holes punctured the Velociraptor's body where the bone spurs hit. Even near dead,  the dying Velociraptor still stretched out its sharp claws to catch the cubs.

Gulu saw for the first time the deadliness of a Stegosaurus's tail. This kind of force directly penetrated the whole body of a Velociraptor.

At last, they succeeded in taking advantage of the Stegosaurus group to escape from the clutches of the Velociraptors.

The three kept running, even after they left the Stegosaurus group far away. They didn't dare to slow down until they reached the nest.

The cubs were frightened, and all huddled inside. Although the nest seemed a little crowded for them now, it made them feel safe and secure.

Guji and Gudong laid on the ground gasping for breath and cried out: "Brother, how terrible! Velociraptors are so scary. Stegosaurus are also fierce. Their feet will trample us to death. Their tails are so horrible …"

Gulu: "Let you dare to run so far to play in the future!"

Of course, the three surviving cubs didn't have the courage to tell Gaya about the danger they encountered today. Before she came back, they conspired together to say they hadn't gone anywhere today.

Guji and Gudong clung to Gulu and asked: "Brother, how do you know that Stegosaurus can drive away those Velociraptors? Why are you so powerful. You know a lot …"

When Gaya came back, she brought them a large piece of meat. Guji and Gudong pounced on it and ate crazily. Gulu still chewed his ferns.

Soon after the three were finished, Mungo returned with his brothers.

By this time it's already evening. The heat of the day gradually faded while the cool night wind was blowing through the forest and lush fern fields, accompanied by the sound of rustling sand.

After a day of hunting, eating and activities, all Tyrannosaurus rex were tired and laid down near their nest to rest.

But the three cubs were still energetic. They didn't want to go to bed so early.

While Gaya took care of the eggs that had not yet hatched, the three cubs went to Mungo to play.

Mungo, although "notorious" outside for being synonymous with brutal bloodthirsty killings, was extremely patient with the three cubs and seldom got angry with them, which was uncommon.

Tyrannosaurus rex's temper was never good – manic and sadistic. Gentle Mom like Gaya was hard to find. Leaders like Mungo were even rarer.

Mungo laid down on the ground to rest. The three cubs were chasing and playing beside him, even climbing on him to have fun. He remained motionless and the let them play.

Mungo's body appeared really big, just like a hill. Soon, the three cubs got tired of climbing up and down the 'hill'. They laid on their back panting besides him. Once they recovered their strength, the cubs started chasing and playing on Mungo again.

The rest of the male Tyrannosaurus rex was lying beside Mungo. They didn't like the appearance of the three cubs. A Tyrannosaurus rex group was heavily hierarchical. How could Mungo let these little ones be so licentious?

The younger cubs got more and more excited when playing. They couldn't satisfy playing only on Mungo. They slipped down from Mungo and climbed up the back of Munroe … A row of male Tyrannosaurus rex's backs became their "parkour" field.

These male Tyrannosaurus rex were too afraid to get angry.

Munroe's violent temper was really difficult to endure. He wanted to shake off these three young ones from his back and beat them violently! Especially Gulu. A Triceratops cub dared to step on Tyrannosaurus rex to play. Was there any justice in this world?!

However, with Mungo in charge, he could only endure.

The three cubs had played this way more than once, so Gulu was no longer afraid of these male Tyrannosaurus rex.

Munroe felt Gulu skipping on his back. His four paws were very stocky. Triceratops' feet weren't like Tyrannosaurus rex with hard, sharp claws. Their feet had soft meat pads … It's actually very comfortable to be stepped on like this.

When Gulu got tired from jumping, he leaned back and rubbed his horns on their backs.

Gulu began to grow horns during this period of time. They were very itchy. He wanted to rub them. Usually, against Mungo, Gaya, Guji and Gudong or where trees grew on the ground.

At present, Gulu's horns only had small sharp points, which weren't too hard and almost as soft as jelly. Gaya, Mungo, Guji and Gudong liked Gulu to rub his horns on them, which felt very comfortable.

Munroe was no exception. To be honest, he liked Gulu's plump and soft waxy foot pads to step on his body and Gulu's soft Q-bomb's small sharp horns to rub against him.

Munroe: Emmm…… … What should I do?! No, if we can't bear to eat Triceratops after this, wouldn't we starve to death? We can't keep this little devil Gulu anymore!

Although Munroe had made up his mind to eat Gulu, Mungo protected Gulu so well that he couldn't find a chance to start.

On this day, Mungo took his brothers out hunting. Gaya also went out to look for food. It was time for the three cubs to play freely.

Guji and Gudong were still obsessed with the forest, so the three of them sneaked out again.

As they went out more, the cubs fully mastered how to hide themselves by using the terrain and luxuriant ferns. Their bodies were already small. It's not easy for predators to find them when they're well hidden.

This time they chose a completely different path. Since they took a separate route each time, they could see different things, which made the young ones very obsessed.

The cubs reached a valley along the edge of the forest.

Standing above and looking down, they saw a large Triceratops community living in the valley!

Their population, both large and small, may add up to 2,000 or 3,000, which was probably the largest Triceratops population on the continent of Yukan.

Such a large ethnic group must have a particularly powerful leader, otherwise it wouldn't be able to lead so many Triceratopses.

Gulu: Wow, this is Pado's ethnic group! No wonder it's so big!

Pado was lying by a female Triceratops. She must be his wife. Wow, Pado's wife looked so beautiful. Her whole body was pale pink.

Two small Triceratopses laid beside Pado. They must be his children.

The two Triceratopses rubbed Pado as if playing coquetry, then climbed on him to play. Pado wasn't angry at all.

Arguably, as the leader of the ethnic group, Pado's majesty should be inviolable. Even his own cubs couldn't be so presumptuous.

Gulu really envied these two Triceratopses. They had such a powerful father, who was domineering outside but so gentle at home.

He looked on at all these.

Until a loud roar sounded behind him: "Gulu! I knew you were the little Triceratops that Mungo adopted! These two Tyrannosaurus rex cubs belong to his group, right?!"

When Gulu turned around, he saw the Triceratops that wanted to trample him to death before. His name seemed to be Heili.

Gulu knew that Triceratopses would trample Tyrannosaurus rex's cubs to death when they saw them. The three of them could never escape from such a robust Triceratops.

Guji and Gudong: "Our brother is not a Triceratops, but a Tyrannosaurus rex!"

Heili: "Oh? You have eaten so much Triceratops's meat. You will know if Gulu is your favorite meat with one bite."

Guji and Gudong: "No, we won't eat our brother! You big bad dinosaur!"

Guji and Gudong were frightened and shivered behind Gulu.