BAD Chapter 9: Do you want to eat Gulu? 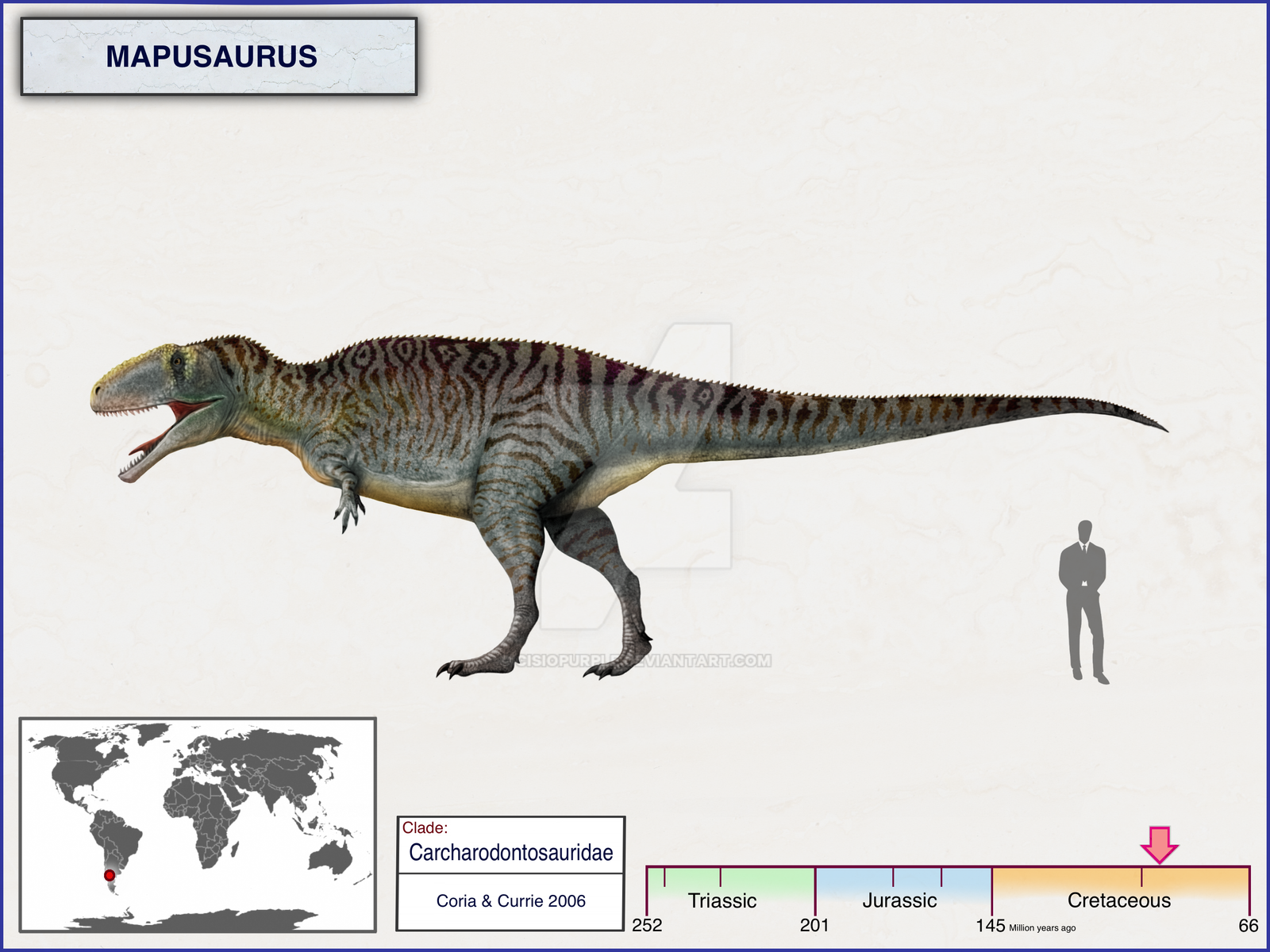 Mungo laid on the ground.

Gulu, who was overwhelmed, stood foolishly for a while.

Mungo: "Are you afraid of me?"

Gulu: Isn't that obvious? You're a Tyrannosaurus rex, I'm a Triceratops …

"No, not afraid, you are so kind to me and bring me a lot of delicious food every day."

In fact, Gulu and Mungo never spent time alone with each other. Now they seemed very awkward.

So far, Gulu didn't know why Mungo let Gaya keep him. He felt even more uncertain on whether Mungo would eat him or not.

He didn't understand why Mungo was so kind to him. If he wanted to say it was for Gaya, it would be enough to not starve him to death. Why would Mungo bring him all kinds of delicious food every day?

Was it for the sake of better meat quality?! After all, a lean Triceratops was certainly not as delicious as a fat one. It seemed that Mungo was a Tyrannosaurus rex who paid great attention to the quality of meat.

At this time it was already noon, the sun shone very strongly. Mungo laid under several luxuriant Alsophila trees, cool and comfortable. But because Mungo's body was too large and occupied all the shade, Gulu was completely exposed to the sun beside him.

Mungo tapped on the ground beneath him with his front paws and called out, "Come here, aren't you afraid of the heat?"

Gulu felt that Mungo's short front paws were really cute, if he wasn't so scared of them. He walked slowly past, but still very awkward. All four legs didn't know where to put them.

Mungo gently pulled Gulu up with his front claws and said, "Get on my paws."

Gulu also got the nerve to lie down and continue to strengthen his heart. Mungo is just like Gaya. I often lie down on Gaya's paws, which is very comfortable! !! You are reading stolen text, if you read this at any other site besides idleturtle-translations.com. !!

Er … no need to compare, it's as comfortable as Gaya's! There is no better "real leather sofa" than this one with real leather materials: black, bright and smooth ribs, strong and elastic muscles.

Although a Tyrannosaurus rex's front paws looked very small when compared with its huge body and seemed here to just look cute, there were more than one meter long and could lift 200 kilograms of heavy objects!

Gulu was still so small, less than 80 cm in length, and sat just right on Mungo's front paws, which resembled a comfortable big pillow and small sofa.

Together with the Alsophila trees above shielding the sun, Mungo's large body played a very good role in heat insulation and sun protection. The breeze blowing along the river with water vapor made Gulu feel like he was staying in an air-conditioned room with a humidifier on, very pleasant.

In the world of Tyrannosaurus rex, the stronger the body, the more attractive to the opposite S*x.

It was obvious that Ulam had no interest in this male who pursued her.

Of course, this male Tyrannosaurus rex felt Ulan's lack of interest in him, so he didn't dare to approach her. Instead, he just stood and watched at her from a distance, motionless, as if he could be satisfied as long as he looked on like this. There was no doubt that he was full of "idiots".

Gulu wanted to give this male Tyrannosaurus rex a voice: Goddess, my goddess, I would like to become a "stone statue" for you …

To what extent was this male Tyrannosaurus rex insane? An injured small-horned dinosaur passed by him. He didn't even respond. Such a good prey should never be let off! This was simply against the nature of predators!

Gulu didn't know how long this male Tyrannosaurus rex would stare on. He wanted to wait and see if there was any wonderful plot behind it. After all, this was the live version of "Cretaceous love story – Tyrannosaurus rex special". Oh, how rare!

But waiting was really boring.

Gulu began to play with Mungo's small paws on his forelimbs in a boring way. Mungo was not angry at all but let him play. Gulu became bolder and bolder. In the spirit of scientific research, Gulu put forward a somewhat excessive request: "Mungo, can I count how many teeth you have?"

Mungo was also bored, nodded his head to say yes, and opened his mouth.

Gulu climbed on Mungo's shoulder and held his chin to count carefully.

Gulu used to forget all about eating and sleeping when he studied dinosaur fossils as a human being. Now the problem had not changed. Looking at it, he felt that he couldn't see the innermost teeth clearly and climbed directly into Mungo's mouth …

Tyrannosaurus rex has a mouth length of 1.5 meters, which was more than enough to accommodate the small Gulu. He still felt very spacious inside, standing, sitting, lying down and counting, all very comfortable.

Gulu sighed as he counted Mungo's teeth: F***, Mungo is so domineering. The coarsest teeth are thicker than an adult's arms, with a total of 80 teeth, 20 more than the modern fossil research! Each one was 30 cm long with the crown being 18 cm.

And Tyrannosaurus rex's tongue was so big that it's not a problem to completely wrap around an adult. The tongue has barbs but now it's all folded up. Although it looked a bit rough, it still felt smooth and very comfortable.

Mungo didn't expect Gulu to dare enter his mouth to count. He kept his mouth wide open for fear that he couldn't control his nature and ate this delicious little fellow.

However, once he opened his mouth for a long time, he would drool all over the floor.

Gulu observed very carefully. If he had a notebook and tape measurement, he would measure it in detail and record the data according to the facts.

After the observation, Gulu jumped onto Mungo's shoulder and slipped all the way to the ground. He rubbed the saliva off in the sand by the river. Taking a sand bath was the best way for dinosaurs to clean up.

Mungo: I can finally close my mouth …

Gulu: "Mungo, your mouth is so big, your teeth are so large, your tongue …"

Mungo looked at him quietly.

Gulu sighed before suddenly realizing: F***! Did I just go into the mouth of a Tyrannosaurus rex? Am I crazy? Oh, my god! I am a Triceratops! Mungo can refrain from eating. I absolutely admire …

At this moment, Gulu no longer felt afraid of Mungo.

Besides the heavy rain day when Gulu stood on top of Gaya's head, he had not sat any other Tyrannosaurus rex's head. Mungo stood up. He was so tall, Gulu wanted to shout excitedly.

Mungo walked slowly back through the tall trees. The thick leaves gently caressed Gulu's body. He smelled their fragrance and sometimes ate mischievously. He was very happy all the way.

Just hanging out for an afternoon, Gulu didn't know how but he and Mungo became close.

In the next few days, Gulu clamored for Mungo to take him to the Dada River to see Ulam and how the dead Argentinosaurus was eaten.

No matter when they go to see it, in the morning, noon or evening, different predators were eating the meat of the Argentinosaurus, day and night.

The Cretaceous climate was warm and dry, and the meat of the Argentinosaurus rotted the next day. On the third day, it began to stink, but many scavengers still regarded the meat as a delicacy.

When Mungo took them to eat, the dinosaur hadn't died. So, they ate the freshest food, which also showcased Mungo's ethnic group as the top predator in this area.

Then there were other Tyrannosaurus rex. After them came large predators such as Mapusaurus and Majungasaurus, small predators like Velociraptors, Troodontids and pterosaur … finally there were old dinosaurs and some mammals.

This eating order showed that Tyrannosaurus rex was still at the top of the food chain on this planet.

Gulu found that different male Tyrannosaurus rex was attracted to Ulam every day, but none of them could arouse Ulam's interest, let alone profess.

The growth rate of little dinosaurs happened very fast. The three little cubs showed strong adventurous spirit and desire for exploration of the outside world. They were definitely not satisfied to only move around their nest.

While Gaya was taking a nap at noon, the three cubs sneaked into the dense fern bushes, which was the farthest they had ever run.

The three were playing in a small pool. Gulu checked the water in advance. The water was very shallow and there would be no such horrible creatures as king crocodiles.

However, Gulu was still a little worried because they ran too far. After playing for a while, he said, "It's about time we go back."

After traveling so far and playing for so long, Guji and Gudong felt very hungry. They watched Gulu while swallowing saliva and said, "Brother, why do you look so delicious? It's strange."

Gulu thought, it's over, these two little guys may have awakened their nature and can't help wanting to eat me. He swallowed his own saliva and bluffed, "How is that possible? You are the ones who are delicious!"

Guji and Gudong: "Brother, let me smell and lick you …"

Translator Notes: For those of fragile heart, it's just a false alarm. Don't worry.