BAD Chapter 8: The super big dinner is ready to eat 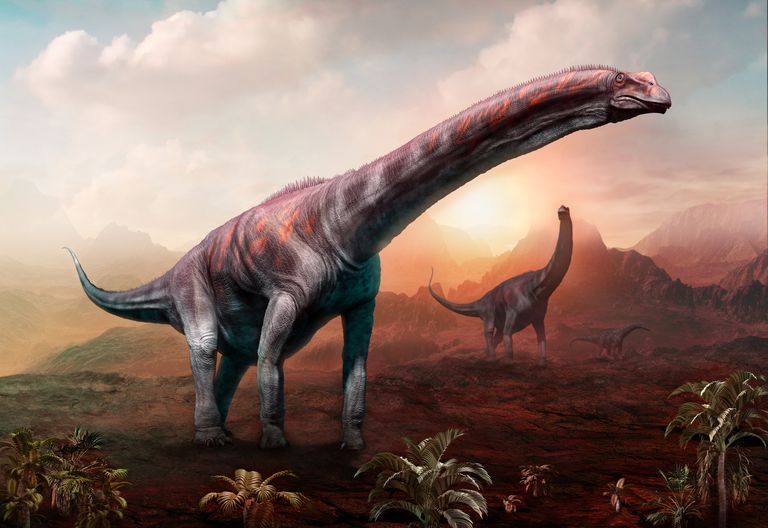 Gulu couldn't eat much for many days. He drooled when he was hungry. A string of clear saliva flowed out of his mouth from time to time. He was really hungry.

Gaya was so anxious that she couldn't sleep every day. She went everywhere to find various ferns and plant leaves for Gulu, but Gulu still didn't like to eat them.

But there were no fruits at all during the Cretaceous period.

Although angiosperms appeared in large quantities in the late Cretaceous period, they were still quite different from today's plant system, most notably the absence of edible seeds and fruits. !! You are reading stolen text, if you read this at any other site besides idleturtle-translations.com. !!

If he really needed to eat fruits to cure this disease, Gulu thought he would definitely starve to death.

Until the evening of the sixth day and the sunset clouds covered the sky, Mungo came back with some green branches that appeared to have small black berries on them.

Mungo had just approached the nest when Gulu already smelled the sweet scent in the air.

Gulu looked up at Mungo. The fire clouds were blooming in the sky, and Mungo was shining with dazzling golden light.

At this moment, in Gulu's eyes, Mungo was the archangel descending into the world!

The branch fell into the nest and Gulu jumped at it immediately.

After eating a berry, Gulu said: Wow, it's so sweet, a lot of fruit juice, so sweet. Oh, my God, this is a fairy berry! Much better than modern fruits!

Gulu looked for berries one by one, and the corners of his mouth were covered with purple pulp.

Gudong and Guji watched their brother eat so sweetly. They had never eaten berries. They had never even seen them. The two also hurried to look for berries like Gulu, but they vomited after eating only one. They felt very bad. Meat was still the best food to eat!

Mungo was lying on the edge of the nest looking at Gulu.

Gulu turned to Mungo after being full. He was so excited that he couldn't help jumping up and gave Mungo a big kiss. The pulp on the corners of his mouth spread all over Mungo's mouth.

Mungo was also curious about how delicious this berry was and stuck out his tongue to lick the pulp on the corners of his mouth. Mmm … it was not as delicious as meat.

Gulu: "Mungo, how do you know I like this? How kind of you!"

Mungo wouldn't tell Gulu that he secretly observed Triceratops for many days and found that cubs about the same size as Gulu there also had anorexia during this period. Triceratops' parents fed this berry for their cubs.

Of course Mungo wouldn't know that Triceratops cubs must eat berries to digest more leaves and ferns when they grew to 2-3 months. Triceratops would grow very large in the future and need a stomach with very strong digestion.

Triceratops all knew that cubs must eat berries at this age, but Tyrannosaurus rex didn't know the details of raising these cubs.

If Mungo hadn't observed Triceratops and found these berries, Gulu would soon die from hunger and malnutrition.

After eating these berries, Gulu was able to taste ferns and leaves again. His appetite improved to better than before. Gaya was very happy.

The next day Mungo brought back a red berry, sour and sweet. Yesterday's black berry was very sweet. Today's berry is a little sour, enough to adjust the taste.

On the third day Mungo brought back a kind of green berry. It was small, crisp and sweet. Neither of the first two berries was crisp. It tasted a bit like apple.

On the fourth day Mungo brought back all three berries, and Gulu almost went go to heaven with happiness.

Gulu studied these berries carefully, but because he didn't specialize in "paleobotany", he finally recognized only the black berry called "mangosteen" belonging to the family of Cornaceae while the other two were completely unrecognizable.

On the fifth day, Mungo didn't bring back berries, but hazelnuts and pine nuts! A small number of nuts had appeared in Cretaceous period.

Gulu didn't know that Mungo secretly lurked in the vicinity of Triceratops to observe. He would give Gulu whatever Triceratops gave its cubs.

Because Triceratops cubs needed nuts to make their stomachs more resistant to wear from stomach acids after eating berries, Pado's Triceratops strictly followed the "secret" of raising cubs handed down from generation to generation.

This was also the reason why Pado's population was growing. Many other Triceratops had extremely high infant mortality rates because they couldn't harvest enough berries and nuts.

Because these berries and nuts were really hard to find compared with leaves and ferns. There were not many plants that could bear fruits in Cretaceous period. Mungo found them only after secretly following Triceratops of Pado's ethnic group.

Gaya also wanted to go harvest these berries and nuts for Gulu, but Mungo refused to let her go. The places where he picked these berries were too dangerous. In addition to the difficult road, there were also high chances of meeting Triceratopses.

A lone Tyrannosaurus rex would be killed dead by them. Mungo was "the brave martial artist" who dared to lurk alone near the Triceratops to observe and even follow them to pick berries and nuts in such dangerous places.

Since then, Mungo had been visiting the vicinity of the Pado ethnic group from time to time to observe how these Triceratopses raise their cubs, fearing that Gulu would have another special situation that he and Gaya couldn't handle.

Time passed quickly. In a twinkling, Gulu, Guji and Gudong were more than three months old. The nest couldn't stop them anymore and they would climb out to play by themselves at any time.

Mungo and Gaya occasionally took their cubs to eat meat at the scene instead of always bringing them back to their nest.

On this day, Gaya heard Mungo calling them to dinner and immediately rushed over with her cubs.

When Gulu saw the prey lying on the ground, he froze. It was too huge! !! You are reading stolen text, if you read this at any other site besides idleturtle-translations.com. !!

This was a male Argentinosaurus. It should not be dead yet, but it has no strength to struggle and could only wait to be eaten alive.

(T/N: The Argentinean dinosaur will now be called Argentinosaurus)

The strong scent of blood and meat from the giant male Argentinosaurus attracted all predators within a few kilometers.

Mungo's brothers stood by the male Argentinosaurus, while the rest of the predatory dinosaurs stood at a distance. They didn't dare to come and grab food from Tyrannosaurus rex.

These dinosaurs standing far away all saw the small Triceratops in this group of Tyrannosaurus rex.

Although they had long found out that Mungo's ethnic group raised a Triceratops cub, they only heard about it. After seeing with their own eyes, they still felt incredible!

Mapusaurus 1: Mungo really has a Triceratops!

Velociraptor: Does Mungo want to raise that Triceratops before eating?

Troodontid: Mungo's brain is really out of order!

Pteranodon: This world is crazy. Tyrannosaurus rex is the parent of Triceratops!

Gaya and Mungo walked slowly to the side of the Argentinosaurus with their three cubs. Mungo's brothers waited for the leader to take the bite before they dared to eat.

Mungo jumped onto the back of the Argentinosaurus. He let out a roar and bit down. The rest of the male Tyrannosaurus rex swarmed in.

The best backbone of the Argentinosaurus was, of course, Mungo's own. Mungo's ground only dared to eat the rest of the male Tyrannosaurus rex when he's full.

Gaya took her cubs and ate the back-leg meat that was easy to tear off. The bite force of the cubs was too small to eat the back meat.

Of course Gulu was totally here just to mix.

Mungo bit off a large piece of back meat and brought it to the young ones. He also helped Gaya to watch the children so that Gaya could eat the back meat.

The hierarchical system in the adolescent Tyrannosaurus rex group was not there to show some special privileges like human beings, but to improve the survival rate. It was based on the principle that the Tyrannosaurus rex leader should be fed first because he served as the backbone to resist foreign enemies.

For example, there were still many predatory dinosaurs standing at a distance waiting for them to finish their meal. Among them were several adult male Tyrannosaurus rex about the same size as Mungo, but they dared not make a move.

The rest of the hunters would only come up to eat when Mungo's population was full and left far.

Gulu didn't want to walk away. He had never seen a Tyrannosaurus rex's courtship scene yet.

Driven by great curiosity, Gulu rubbed his head against Gaya's big paws in a pettish manner: "Mom, Mom, I want to see the two Tyrannosaurus rex opposite here. Would you please accompany me, please …"

Gaya was very puzzled: "What's there to see?"

Adhering to the spirit of scientific research, Gulu was going to be a little ancestor: "It depends, It depends on it, Mom…"

To be honest, Gulu was still very afraid of Mungo. Although Mungo was his "special food delivery angel" and brought him all kinds of delicious food every day, he was too cold to grasp.

Gulu: "I, I can actually do without watching …"

Gaya: "I'm relieved to have Mungo with you. Look, then come back early."

Gulu: Mom, Mom, don't leave. Is it still too late for me to regret?

BAD Chapter 7: The most notorious Tyrannosa[…]

BAD Chapter 9: Do you want to eat Gulu?

← BAD Chapter 7: The most notorious Tyrannosaurus rex also has today! ← BAD Chapter 9: Do you want to eat Gulu?
%d bloggers like this: