BAD Chapter 4: What a large dinosaur pool to swim in 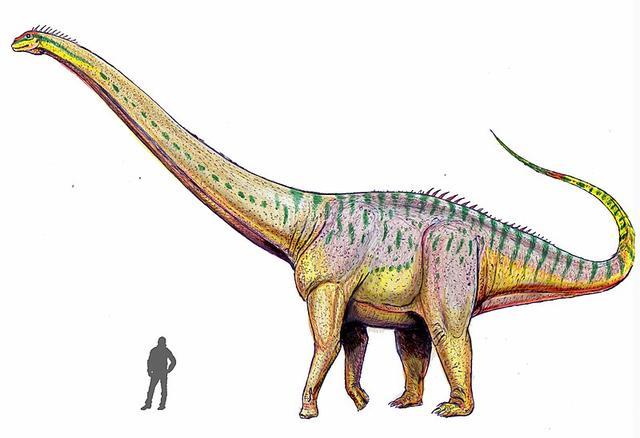 Argentinosaurus, an herbivorous dinosaur, was 12 meters tall, 42 meters long and weighed 100 tons. It was one of the largest land dinosaurs found so far.

Gulu was stunned, but to his disbelief, further away he saw the largest dinosaur ever found, which was the Alamosaurus!

Alamosaurus dinosaurs, were 60-80 meters in length, 25 meters high and weighed 130-220 tons. They belonged to herbivorous animals and were the largest dinosaur found so far and the largest animal in history.

Gaya asked, "Gulu, have you seen those big guys?" !! You are reading stolen text, if you read this at any other site besides idleturtle-translations.com. !!

Gulu nodded his head. Because it was raining hard, he spoke with difficulty: "See, I see them, Mom."

Gaya: "Those big guys can crush you with one foot. They are coming this way and will pass through our territory. You must stay beside Mom and not leave at all, do you understand?"

Gaya continued, "We are Tyrannosaurus rex. We are not afraid of them, no matter how big they are, but you are still too young. If you run to these big guys carelessly, it will be too late for me and Mungo to save you. We cannot kill them in one bite …"

Gulu nodded desperately and promised not to run away. Gaya slowly put him back to the ground, then let Gudong and Guji stand over her head to see and teach them the dangers in the same words.

Even so, Gulu still didn't understand. As long as they didn't run away, there was almost no danger. Mungo and the male Tyrannosaurus rex didn't need to be so nervous, there was no need to adjust their defense status to full level. There must be other reasons.

The rain was too heavy. Soon, their nest had already been filled with water, and the three cubs were almost blinded by the torrents.

Gaya folded the cycad leaves and spread them on the ground. She let the cubs hide under her belly.

Hiding under their Mom's belly, they couldn't feel a drop of rain. Tyrannosaurus rex's body was too wide for the rain to come in.

Guji and Gudong felt very magical. They rolled and played on the leaves of the cycad and kept rubbing together and grunting, "Brother, come and play, it's so slippery and fun …"

The two cubs took the wet cycad leaf as a skateboard and had fun sliding around.

Gulu was not in the mood to play with his younger brothers now. He was watching with rapt attention as the swarms of Argentinosaurus came closer and closer to them.

The Argentinosaurus were so huge that one passing by alone felt like a small earthquake, not to mention a large group.

Before scientists discovered the fossils of the Argentinosaurus, they thought that the Seismosaurus was the largest dinosaur on earth. Seismosaurus weighed about 30 tons. They were called Seismosaurus because they was so heavy that every step shook the ground like an earthquake.

So many Argentinosaurus came up to them, getting closer and closer, shaking the whole ground like a medium-sized earthquake. The three little cubs, who were sitting under Gaya's belly, were thrown under her buttocks. If Gaya's huge hind legs had not blocked them, they would have rolled far away.

Gudong and Guji did not dare to play anymore. They held Gulu tightly and said, "Brother, they are so terrible, so big …"

Gulu comforted them: "Don't be afraid. They mostly eat plants and don't eat meat. As long as we don't go to their side, we won't have to be afraid …"

As the Argentinosaurus drew closer and closer, the roars of Mungo and the male Tyrannosaurus rex grew louder and louder. They were warning these big guys not to walk here!

At last, the Argentinosaurus group passed by the defensive circle formed by Mungo and the male Tyrannosaurus rex.

Gulu watched the Argentinosaurus so closely for the first time.

Therefore, many animals were running at the foot of the Argentinosaurus group, such as the cubs of Ankylosaurus, Camptosaurus and Stegosaurus. Small carnivorous dinosaurs such as Troodontids, Velociraptors, crocodiles and turtles also migrated to another area of water during the heavy rain. They all ran like crazy.

As soon as the Argentinosaurus stepped down, a huge pit with a depth of more than 3 meters and a diameter of more than 10 meters was immediately formed on the ground. The soft soil and water around it slowly flowed back into the pit. The Troodontid dinosaur that ran out over the small Stegosaurus was brought back into the pit by the huge "mud flow".

No matter how detailed the dinosaur fossil's records explained, there was no greater shock than seeing the scene with one's own eyes. Gulu was stunned.

The ground gradually calmed down. Gudong and Guji said to Gulu, "brother, my butts hurt so much …"

Gulu: My butts are also throbbing with pain o(╥﹏╥)o

Gaya hurriedly looked at the eggs that had been transferred to the outside of the nest. Fortunately, none of them had been damaged.

Gulu knew that dinosaur eggs were very hard, because most dinosaurs laid eggs standing on their feet. Dinosaurs were very tall. But eggs dropped from such a high place into the nest would not break. So, they couldn't be broken so easily. Gaya was just too worried about her eggs.

It was also at this time that Gulu learned that Mungo organized the highest level of defense not only to protect them, but also to protect these small Tyrannosaurus rex that had not yet broken their shells. The three of them could be carried away, but they couldn't take away these many eggs. If the Argentinosaurus walked here, all of them would be crushed.

To ensure that the eggs were in good condition, Gaya found more cycads to cover the eggs. She then went back to the three cubs and laid down to shelter them from the heavy rain.

Other male Tyrannosaurus rex also laid prone on one side. Mungo alone walked to a giant pit formed from the step of an Argentinosaurus.

Gulu saw Mungo jumped into the huge pit, took out bodies of various small dinosaurs with his small short hands and threw them aside. Then he used his powerful huge hind legs to step on the muddy ground at the bottom of the pit, splashing out the muddy water at the same time.

In a short while, he cleaned the whole pit firmly enough that the mud in the pit was almost empty. He laid cycad leaves layer by layer at the bottom of the pit, then came out to wait beside it.

The heavy rain continued. Soon, the water inside the big pit was full and overflowing with the water quality getting clearer and clearer.

The Great Pit had become a small pond with clear bottom, reflecting blue sky and white clouds, like a gem inlaid on the ground.

Mungo walked up to Gaya and said, "Take the little ones over and play."

After breaking the shell, the cubs had never played with water before. Before Gaya could speak, the three cubs swished and rushed to the big pit.

However, when they reached the big pit, they did not dare to move. The water was too clear. They could see the bottom shape of cycad leaves and dinosaur footprints. The pit was too big and deep for them, and they were a little scared.

Gaya encouraged the cubs: "jump down and play, don't be afraid."

Many dinosaurs were born to swim, which was a necessary survival skill. But now the little ones were too young to take to the river. Mungo came up with such a way to build a huge swimming pool next to the nest.

Gulu was the first to jump in. He fluttered wildly for two times then floated up. Gudong and Guji also got up the courage to jump in and learned the appearance of Gulu. After a few flops, they also floated up.

The three little guys swam around in the curious water happily.

It was noon now. The sun rose immediately after the rainstorm. Rainbow gradually appeared in the air. The rainbow was very large and almost spanned the whole plain, connecting the forests on both sides.

Gulu laid back on the water, looking at the huge rainbow, at swarms of Quetzalcoatluses flying under the rainbow bridge, huge Alamosaurus dinosaurs eating very high leaves in the distance, and more Ankylosauruses, Camptosaurus and Stegosauruses eating ferns …

Wow, it was very beautiful.

Gudong and Guji had never seen a rainbow before. They laid on their back on the water and looked for a while. It took them sometimes to react and say, "Brother, brother, what is this, how nice, how big …"

Gulu: "This is called a rainbow. If the sun comes out immediately after the rain, there will be a rainbow …"

The three cubs played in the water for a long time. They couldn't tear themselves away until their stomachs growled.

Today Mungo brought back half of the Stegosaurus. Gaya did not chew it for the young ones but let them eat it directly. So the three cubs jumped on the Stegosaurus and chewed it hard, but it was a little difficult to eat because their teeth were not sharp enough.

Gulu, of course, also pretended to eat meat. Until Gudong and Guji's belly rounded up, Gulu was still hungry.

Because the nest was full of water, Gaya allowed them to play outside for a while, but only within sight of her.

Gulu was really hungry. There were ferns everywhere, but he did not dare to eat them. While Gaya was eating, there was a fight between Gudong and Guji. He ran to one side and secretly ate ferns.

Too busy eating ferns, he didn't find that his surroundings were full of Tyrannosaurus rex. When he was full, he looked up and sat down on the ground.

Now Gulu had only one thought in his heart: It's over. Gaya found out I ate ferns. She must know that I am not a Tyrannosaurus rex!

Translator Notes: Fun fact, did you know that Tyrannosaurus rex can be both singular and plural noun?

← BAD Chapter 3: Some dinosaurs like to send their own dinosaur heads from thousands of miles away ← BAD Chapter 5: Please call me an Oscar-winning Triceratops
%d bloggers like this: