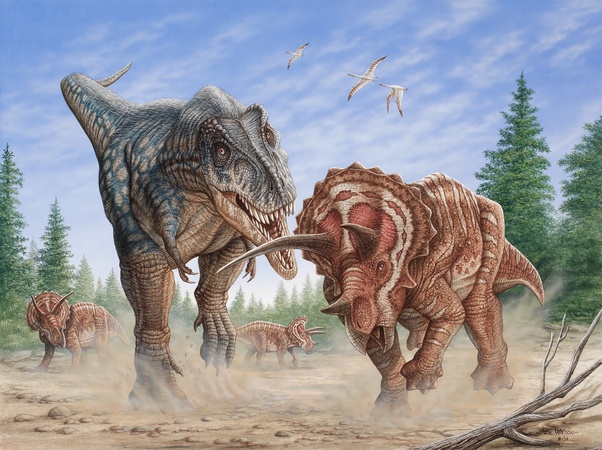 Gulu knew that the biting force of this Didelphodon was amazing. If he was bitten, he would be torn apart alive and death would be extremely miserable.

He ran towards the luxuriant fern bushes. He ran desperately and did not dare to look back. He could only judge the distance by the sound of the hunter running through the bushes behind him.

At the same time, Gulu used luxuriant fern bushes to shield his body, and all kinds of S-shaped and Z-shaped movements barely allowed him to keep ahead of the predator.

He didn't know how long he had been running, but he felt it had been a long time since his lungs were about to explode.

However, the predator behind him seemed not tired at all. He was always chasing after him and would soon catch up with him!

Gulu felt very desperate. It happened that when rained, it poured. He ran so fast that he tripped on a claw and rolled about dizzily.

He thought it was over. Looking back, he saw a huge claw stepping on the Didelphodon chasing him. The Didelphodon instantly exploded!

Gulu was scared half to death. He just realized that this was huge claw that tripped him just now. It was only because he was too fat and rolled too far that he escaped the bullet by rolling into the fern bush beside him.

This giant claw belonged to a particularly strong adult Triceratops. There were several Triceratopses and Tyrannosaurus rex fighting!

The adult Triceratops was subconsciously looking for something. He clearly felt that there was a little thing rolling over. How could it have disappeared?

Gulu hid in the dense fern bushes. He was very afraid and wanted to run away quickly. He was also scared that the noise of his escape would attract the attention of these Tyrannosaurus rex and Triceratopses. !! You are reading stolen text, if you read this at any other site besides idleturtle-translations.com. !!

Gulu thought, it's all right now, the Didelphodon has been trampled to death, but I still can't escape!

He watched these Triceratopses and Tyrannosaurus rex.

This was Gulu's first time to see a live and complete Triceratops. These Triceratopses were so big that Gulu doubted whether he could really grow this big. It would take many years.

Triceratopses' horns were made of solid bones, so they have strong destructive power. Triceratops had evolved into a tank-like form and was one of the strongest herbivorous dinosaurs in Cretaceous period. An adult Triceratops was fully capable of defeating an adult Tyrannosaurus rex.

Triceratopses were as powerful as Tyrannosaurus rex, and the war was in full swing.

The head shield of each Triceratops was bloodshot and showed bright colors. Each Tyrannosaurus rex opened its big mouth full of sharp fangs and uttered a roar that shocked the mainland.

The Triceratops closest to Gulu was the largest, weighing at least 12 tons. As soon as he stepped a foot, Gulu felt the ground shaking violently.

While the Tyrannosaurus rex's teeth deeply bit into the trunk, the Triceratops immediately turned to use the top of its head to angle attack the Tyrannosaurus rex. !! You are reading stolen text, if you read this at any other site besides idleturtle-translations.com. !!

At this time, the Tyrannosaurus rex roared and bit hard on the trunk. There was a loud sound and the whole tree was wrenched off by its force. The tree fell on the Triceratops. The Triceratops panicked and ran to one side, barely escaping the broken tree.

So a Tyrannosaurus rex wanting to bite its prey to death was a piece of cake.

However, this Tyrannosaurus rex bit off such a thick tree at a relatively high cost. According to Gulu's visual observation, it lost at least three teeth, and five teeth or more were broken by the trunk.

But predators didn't care too much about losing their teeth. Dinosaurs, like sharks and alligators, would automatically lose their teeth if they bite something too hard. Some dinosaurs could have up to 500 teeth in their lifetime. Their teeth were terrible "disposable weapons".

Gulu: This kind of renewable tooth saves a lot of "tooth filling fee". If human beings develop this technology of renewable teeth, it will be good news for patients with toothache!

Although these teeth could be regenerated, it was impossible to grow them in an instant. This Tyrannosaurus rex lost so many teeth that its combat effectiveness greatly decreased.

This Tyrannosaurus rex no longer entangled with the Triceratops. It found a gap and ran into the forest. As it ran, the Tyrannosaurus rex let out a loud roar, as if to say: Wait for me, I'll call my brothers to clean you up!

The targets of the seven Tyrannosaurus rex were very clear. They gradually surrounded the strongest Triceratops and separated that Triceratops from the rest of the group.

Gulu felt that the Triceratops was dead. His paws sank deep into the soil. His body shook violently. He felt sorry for the Triceratops, as if he himself was about to be eaten.

At this time, Gulu heard a very terrible roar, which he had never heard before. The sound was very penetrating, as if it could cut through all animals' bodies, heaven and earth!

He followed the sound. A particularly strong and robust male Triceratops came rushing from the lush forest. The Triceratops was so big and so large that Gulu wondered whether it was really a real Triceratops or an illusion of his own!

This Triceratops was so enormous that it seriously exceeded Gulu's basic knowledge of Triceratops!

Gulu has studied so many dinosaur fossils. Although the dinosaurs on this planet were the sum of several periods on earth, the size of these dinosaurs was basically the same as that studied, but this Triceratops was at least twice as big as the largest Triceratops Gulu knew!

This Triceratops was not only very large but also ran very fast. Its heavy footsteps were like horrible thunders.

Perhaps because of the illusion of light, and because this Triceratops ran too fast, Gulu only saw the afterimage of the Triceratops appearing like it came straight out of the trees!

As the Triceratops got closer and closer, it looked bigger and stronger. Gulu could hardly believe his eyes.

Gulu thinks that this Triceratops could definitely be called the "King of Triceratops" and came out with background music!

The beleaguered Triceratops had been bitten several times, covered in blood and howling with pain, but he did not fall down. He knew his eldest brother would come to save him!

Accompanied by a loud roar and a hard push, blood gushed out. The largest Tyrannosaurus rex fell to the ground with a bang, only gave a few weak struggles then died.

The spewing blood from the dead Tyrannosaurus rex dyed red half the head of the king of Triceratops, making him look more ferocious and horrible.

Gulu was shocked. He couldn't believe that there was such a powerful Triceratops! This was not an ordinary Triceratops, this was a Triceratops God!

The other four Triceratops were more or less injured. They also ran to Pado's side to rub their heads while chanting, "Pado, Pado, Pado …"

Gulu didn't know until now, this was the legendary king of Triceratops – Pado, who was the largest and strongest in the whole continent of Yukan. (T/N: Just imagine Pado as the size of a T. rex)

Gulu had heard a lot of legends about Pado before. He thought legends always contained exaggerated elements. But now he just knew that they were not exaggerated at all!

Of course, now was not the time to lament these, he must go, Triceratopses were also likely to trample to death cubs not of their own ethnic group.

He walked gently, trying to completely submerge himself in the fern bushes, for fear of disturbing these large and violent adult male Triceratops.

While tiptoeing away, a huge foot blocked his way.

He looked up, it was Pado!

Gulu also didn't know why he always felt Pado was very kind, but he knew that this wouldn't stop Pado from stepping on a cub not of his own group.

On the other side, Gaya also found Gulu missing and couldn't see him after searching around the nest. Gaya was so anxious and called back Mungo with a roar.

Mungo and Gaya were now looking for Gulu everywhere.

BAD Chapter 7: The most notorious Tyrannosa[…]

← BAD Chapter 5: Please call me an Oscar-winning Triceratops ← BAD Chapter 7: The most notorious Tyrannosaurus rex also has today!
%d bloggers like this: