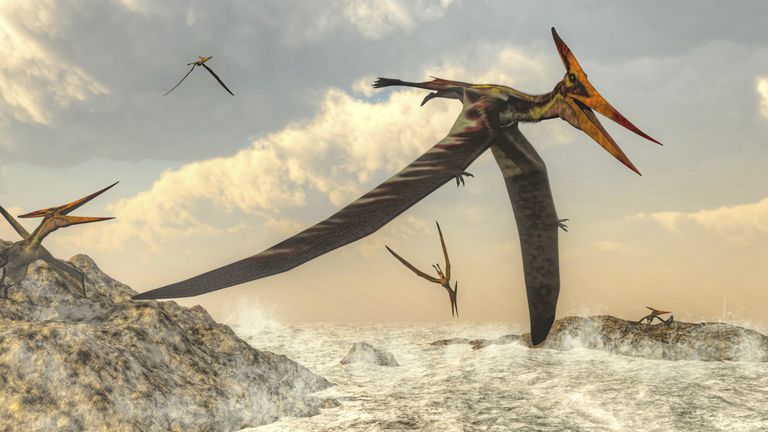 Because Cassie flew relatively high before, Gulu didn't find this cub to be so large when looking down from the sky. This little dinosaur was really worthy of being a pliosaur cub. His body size was simply too fierce.

At this point, the Pliosaurus funkei cub vigorously flapped its four paddle-liked limbs and shook its tail, which looked smaller and exquisite compared to his big head.

Gulu thought that the cub might want to swing his limbs and tail around in a pettish manner like he did around his Dad, but it wasn't cute at all!

If Gulu really wanted to find a little cute place on his body, it may be his short fat tail.

In the end, Gulu still decided to help the young pliosaur. He felt that it wasn't easy for such a huge cub to play coquetry under the big sun. It's also difficult for a pliosaur to breed their young. The father of this pliosaur cub must be very anxious.

This cub had been stranded on the beach for at least one day. The most urgent thing was to wet his body and gave him some seawater to drink. With strength, he could barely struggle to arch his way into the sea. Gulu alone couldn't pull such a big "cub".

He said to the Pliosaurus funkei cub, "Wait a minute, I'll get you some sea water first, so you won't get dried out by the sun."

However, Gulu had a difficult time looking for a container to hold the seawater. Neither Cycad leaves nor Cyathea leaves could hold enough water.

Gulu's eyes searched the entire beach and finally found a satisfied water container – the Pteranodon with only its skull remaining!

This Pteranodon must have been killed on the beach by the hurricane due to the sudden tsunami and its lack of place to escape. It only had a head left after being eaten for just half a day.

Pteranodon didn't have as large of a wingspan as Quetzalcoatlus. When landing on the ground, it stood 5 meters high and had a large head. Its beak was very long and deep. It could hold a lot of water!

Because many dinosaurs and all kinds of marine creatures had died on the sandy beach, there were scavengers eating everywhere. Gulu's human form was too vulnerable and must be closely protected by Cassie.

Cassie, as the Quetzalcoatlus, was now the king of this island. With him beside Gulu, no dinosaur dared to come near.

Gulu just picked up its big skull and smelled a thick fishy scent. He choked back the urge to vomit and ran to the seaside. He washed the head over and over again in the waves. Finally, the smell wasn't that strong. Only then did he fill it up with water.

When completely filled up, a Pteranodon's mouth could hold over 100 Jin of water. If Gulu wasn't a 1.92 meters big man who practiced boxing regularly, he wouldn't have been able to pick it up.

Gulu's human form was actually lithe and slender and didn't appear to be strong. His body was full of youthful breath and unique charm of young people.

The Pliosaurus funkei cub had been smoked here for a long time. He had been stranded on this beach for a day and a night. There was some rain yesterday. But the sun was shining today. If he couldn't return to the sea in the afternoon, he would surely die at night.

The sun was getting hotter and hotter. Gulu was already sweating when he reached the cub with the water.

Gulu struggled to pour more than 100 Jin of water onto this huge cub. Just as the liquid fell on him, all moisture dried off instantly. There was also the sizzling sound of a scorched surface being doused by water …

The dinosaur cub was dizzy from the heat. When the sea water fell down on him, he thought that this strange-looking big brother was shining with golden light all over his body, just like the sea god that his Dad told him about! The sea god had come to save him!

Gulu looked at his inefficient speed and called out, "Cassie, Cassie, please help me to get water for him."

Cassie wasn't a kind-hearted dinosaur. He didn't want to help this ugly dinosaur that wasn't part of his own group. But Gulu was his leader. Gulu's words were his orders. He must carry them out.

The tips of his hair was dripping with sweat. Gulu didn't know how many trips they took before the Pliosaurus funkei cub's skin was finally saturated with water.

This time, when the water was poured down again, the Pliosaurus funkei cub moved his body vigorously, splashing water all over Gulu.

Cassie was very afraid that the cub would suddenly attack Gulu and screeched at the cub. If the cub showed any signs of attack, he would desperately protect his leader.

All dinosaurs wouldn't trust any other dinosaur that wasn't of their ethnic group. Gulu was that way as well, but he could feel that this cub was harmless.

Facts proved that this cub only looked ferocious but was actually soft and adorable. He kept rubbing on Gulu's palm and cried out, "Wow, big brother, how kind of you! Are you the sea god? You must be the sea god!"

Gulu stroked the cub's head with his free hand. He found that there was a soft, Q-bomb palm-sized area above the cub's head. Pew. Pew. Water was continuously gushing out from this blowhole, just like dolphins. It's very magical and felt really good.

The cub also seemed to be comfortable being rubbed in this place. He kept swinging his limbs and tail.

However, now wasn't the time to play with the dinosaur cub. Gulu must find a way to get him into the water quickly.

He found a lot of cycad leaves to twist into strands of rope. He tied them to the cub's tail and limbs. In order not to hurt the cub, he also padded the part where the rope was tied with thick leaves.

Then Gulu asked Cassie to pull from behind, while he pushed the cub's head hard.

Pterosaurs could pick up prey with a weight equivalent to their own. It wasn't too hard to pull the cub. Gulu was also a man with very strong arms. When they cooperated, they really made this nearly 1000 Jin cub move!

The so-called one push and one pull, Gulu and Cassie had been able to do carry it out tacitly. Gulu gently patted the cub's head. Cassie would pull hard while Gulu also pushed hard at the same time.

It's easier to push hard according to the beat.

The Pliosaurus cub also learned to move his huge body according to Gulu's beat and continuously shuffled into the sea to lighten the burden on Gulu and Cassie.

In this way, Gulu finally pushed the cub into the sea. He then became tired and paralyzed. The cub didn't just weigh nearly 1000 Jin, there was also resistance from sand.

Gulu sank into the sea water and rested on the cub for a while before recovering some strength.

The cub rubbed Gulu with his huge forelimbs: "Brother, thank you. I can let my Dad catch whatever you want."

Gulu untied the ropes on this cub and replied, "I don't want anything. You should go to your Dad. He must be very worried …"

Gulu thought to himself: Silly little brat. I dare not accept any terrible marine creature that your Dad can catch.

Soon the ropes were untied. Just then a big wave came and there was a loud bang. He almost missed his footing. Gulu felt that he must have been beaten red all over by the wave.

Taking advantage of this huge wave, Gulu fiercely pushed the cub into the sea. The cub was carried away by the big wave. Gulu heard the cub say: "Brother, what's your name? My name is Shenshen. You must come to play with me ah. I'll let my Dad catch you the most delicious big fish and dinosaur to eat …"

The cub thought that the human Gulu was also a kind of dinosaur from the sea.

Gulu stared at the vanishing cub and thought to himself: I'd like to come, but I dare not. I also want to eat, but I can't either.

Shortly after the cub disappeared, Gulu saw the sea area where he vanished became red with blood!

Regardless of whether the cub was eaten or not, he already managed to save it once.

When Shenshen entered the deep sea, he met his father. As the overlord of the sea, when his only cub was lost for a day and a night, he became very violent. Any sea creature that he met was killed. He wouldn't eat any of them. He just wanted to kill them.

This one day and night, the Sada Sea was filled with terror and bloody smell. All sea creatures, even the Liopleurodons that could normally compete with Pliosaurus funkei, were scared. Who could withstand the attack of a mad pliosaur?

Shenshen swam to his father amidst a thick pool of blood and shouted: "Dad, Dad, I'm Shenshen. Dad, I'm telling you ah. It's a very small brother who saved me. I don't know if he's the sea god. Dad, you must thank him well for me…"

On the other side of the continent, Mungo was also killing like crazy, destroying piles of pterosaurs that were hunting on the beach.

Mungo had lost control over himself.