BAD Chapter 34: For the ‘son of the forest’, these dinosaurs can really put on a show! (1) 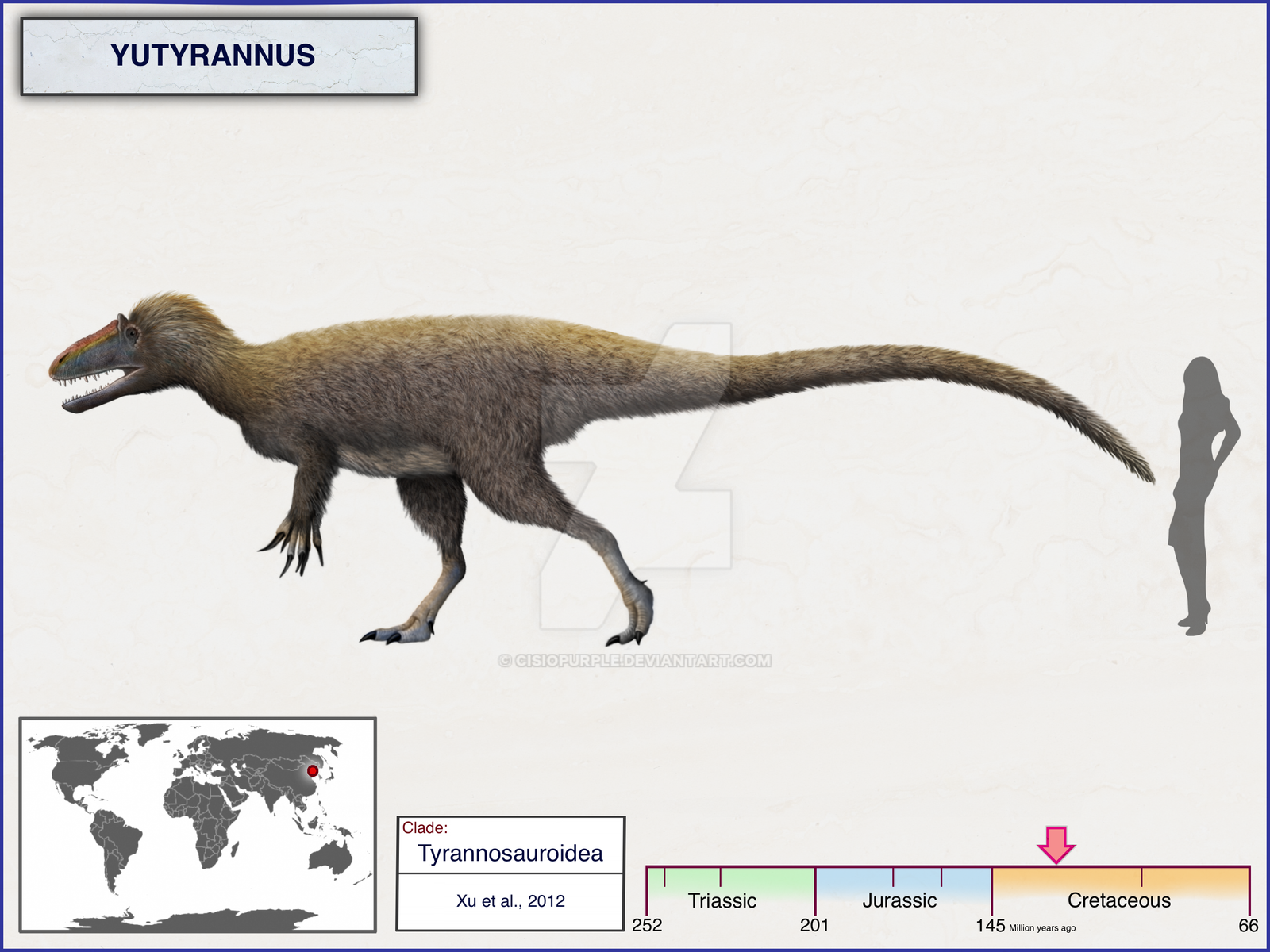 Gulu immediately shouted to Mungo, “Mungo! Quick, to the cave over there! That little Triceratops is inside!”

Mungo quickly ran towards the cave.

While moving, Gulu heard the rustling sound of something running in groups through the fern bushes on the ground. It’s very strange.

However, these things were too small and very good at hiding themselves. Mungo was very tall, so Gulu couldn’t see what they were.

All of a sudden, there were more rustling sound. Next, groups after groups of Xianglong glided down from the tall trees on both sides. Their massive number blocked the road ahead.

No amount of Xianglong could stop a Tyrannosaurus rex, but the sudden appearance of so many Xianglong was so unexpected that Mungo was shocked for a moment.

Gulu was also stunned. He only noticed at this time that there’re many Xianglong parked on the tree trunks on both sides. When these Xianglong didn’t fly, their wings were completely closed, which made them look the same as regular small lizards tightly affixing themselves on tree-sides.

Moreover, the bodies of these Xianglong could also change their colors to match the things around them. When they parked on a trunk, they assumed its color. This allowed them to be extremely good at hiding. It’s their essential ability to survive.

One swarm after another of Xianglong flew down from a row of trees, just like giving the two of them a “group performance”. !! You are reading stolen text, if you read this at any other site besides idleturtle-translations.com. !!

These Xianglong flew very neatly. One just jumped down from one tree, and the next followed down from the next tree to seamlessly connect their flight chain. The view was extraordinary spectacular!

Fortunately, Mungo remembered that they were looking for the little Triceratops that crashed into Gulu and wasn’t “confused” by these dinosaurs. He reacted and sped away.

Since these Xianglong were still far away from them, they weren’t afraid of Mungo’s attack and continued to perform “group flying”. After landing on the ground, they quickly ran up the trees to hide. When Mungo reached them, these Xianglong had already climbed up the trees.

Gulu was surprised to see that these Xianglong could still calculate the “safe distance” so accurately!

They were able to predict the maximum speed of a running Tyrannosaurus rex and could always climb the trees just before Mungo arrived. These Xianglong perfectly showcased the full play of “hit and ran” tactic.

Fortunately, Mungo was a Tyrannosaurus rex with a very strong “purpose” and never got distracted by them. If he became enraged by this tactic and took the time to kill these things that could climb up tall trees, he would be fooled into delaying here. Because they could climb trees, Mungo couldn’t kill them in a short period of time.

Mungo headed straight to the cave opening without stopping. These little dinosaurs never got into his eyes.

As the result, a very magical scene appeared in the forest. The giant Tyrannosaurus rex ran among the huge trees with a small Triceratops on his head. Meanwhile, swarms of Xianglong seemed to be opening the way in front of them while performing in groups.

It was wonderfully magnificent!

Soon Mungo ran past the group of Xianglong. Not too far ahead, a towering tree suddenly fell down, completely blocking their way!

Gulu saw that there’re thousands of Epidexipteryx on the trunk of the fallen tree. They quickly scattered after the tree landed and disappeared in an instant.

Epidexipteryx’s teeth were long and lean forward. They’re very good at hunting insects inside trees. Of course, this kind of teeth was also very good at “pecking trees”. With so many Epidexipteryx, a giant tree could be pecked off very soon.

Mungo, of course, didn’t waste time chasing these Epidexipteryx. He said to Gulu, “Hold on tight.” Then he raised his stout hind legs and kicked the trunk, breaking the big tree in two hits. They quickly moved on.

Even if these towering trees were extremely large for small dinosaurs and human beings, they were “a piece of cake” for a Tyrannosaurus rex and could be crushed with two kicks.

Gulu felt very puzzled. Normally, these little dinosaurs would never dare to provoke a  Tyrannosaurus rex. What happened to them?!

Mungo continued to run and soon they reached the entrance of the cave.

The cave opening was covered with luxuriant ferns. One couldn’t see clearly what’s going on inside. No matter which dinosaur was in the cave, it could pose no threat to a Tyrannosaurus rex. Mungo rushed directly inward.

All of a sudden, with a loud rustle, a large group of Microraptors flew down from the top of the cave. Accompanied by whistling sound, they glided just above Mungo and Gulu’s head.

Mungo and Gulu didn’t expect to still meet annoying “moths” when they got here. The Microraptors flew down so suddenly that both of them froze.

Gulu looked back. The group of Microraptors that glided down finally landed far away from them. Even if Mungo ran to kill several of them now, it’s too late. By the time he arrived, these Microraptors would have climbed back up. !! You are reading stolen text, if you read this at any other site besides idleturtle-translations.com. !!

Because this cave ceiling was too high, one could still fly farther away if gliding down from a higher place. These Microraptors also managed to calculate the “safe distance”!

The Microraptors quickly scattered once they landed on the ground to hide in the surrounding trees and disappeared instantly.

Gulu wanted to applaud these feathered dinosaurs. They really put up a good performance!

After entering, Gulu discovered that the cave appeared very large. Because the entrance was covered with thick ferns, the interior looked very dark. However, many Sinosauropteryx could be seen parked alongside this strange rock forest. Many other dinosaur birds also fixed themselves on the cave wall.

Gulu realized that this was the nest of Sinosauropteryx.

Mungo didn’t make any noise for fear of scaring away the little Triceratops. He quickly looked for it inside the cave. He didn’t even let go of the back of any stone.

Such a terrible Tyrannosaurus rex prowled around the cave, making all the dinosaur birds panic. They flew from boulder to boulder and kept making sharp chittering.

After searching the whole cave, Mungo couldn’t find any trace of the little Triceratops. He felt that it must have escaped through the exit on the other side of the cave!

So Mungo ran extremely fast to the other side of the cave entrance.

The other end of the cave opening was also covered with thick fern bushes, only giving a faint light. But it proved that there was another exit.

Mungo sprinted very quickly and was about to rush out of the cave. Suddenly, he didn’t know from where a small Triceratops came from, it blocked the cave exit and shouted, “Don’t come here! Below is the cliff!”

However, Mungo rushed too fast to brake in time at such a short distance.

Mungo yelled, “Gulu, hold tight” and immediately took emergency measures. He used his feet to brake while dropping his tail to turn his body around. As the result, his huge body couldn’t keep balance, making him sit on the ground with a thump.

After falling on the ground, Mungo still slipped forward uncontrollably for a while. His thick hind legs hit the little Triceratops and kicked it off the cliff.

Now Gulu saw clearly that this little Triceratops was indeed the one that knock him down the cliff that day!

But this little Triceratops had a long scar on its head. This scar had scabbed but still looked very horrible. It must have hurt when injured.

What Gulu didn’t understand at all was why this little Triceratops saved them.

Mungo lowered to the ground so Gulu could come down from his head.

To be honest, Mungo was also frightened. He never expected that after dominating the continent of Yukan for so many years, he almost fell to death just now! The point was that Gulu was still on his head. He would have fallen to death with him! !! You are reading stolen text, if you read this at any other site besides idleturtle-translations.com. !!

Mungo felt that this was simply the greatest disgrace of his dinosaur life!

The current situation was exactly the reason why large dinosaurs didn’t like to come to the forest. The forest was full of trees, making it difficult for them to move around with their large size. They couldn’t even see whether there’re slopes or cliffs behind these luxuriant trees and ferns.

Even if a big dinosaur fell from a slope that was neither too steep nor too high, it would probably still die because of its heavy weight.

Mungo didn’t know what’s wrong with himself. He obviously knew all these things, but he was too eager to find the little Triceratops as soon as possible. He ignored these dangers and almost killed Gulu and himself!

Gulu was also in shock. He blamed himself and rubbed his small body against Mungo’s big head while saying: “Mungo, I’m sorry, I almost killed you. I shouldn’t have made you take me to bath, and I shouldn’t have let you chase this Triceratops …”

Mungo rubbed Gulu back, “I don’t blame you. You’re still so young, what do you know?”

Gulu understood Mungo’s subtext: “You should have been protected by me because you’re so young. I’m already so old but still made such low-level mistakes. It’s all my fault …”

After the two comforted each other for a while, Gulu brought up, “Mungo, I saw clearly that this little Triceratops was the one that hit me before, but why does it want to save us now? It must have fallen to death …”

Mungo parted the lush fern covering with his big head. Gulu also stretched out his small head to look out. Mungo’s forelimbs encircled Gulu and blocked him from accidentally falling off.

Gulu felt very magical. In fact, this was not a cliff, but a steep slope. The whole hillside was shrouded in mist, so the lower part couldn’t be seen clearly. The temperature of the hillside here was also very low. Their stretched-out heads were almost frozen.

Many mountains had “yin and yang slopes”. The warm and humid plants on the sunny side grew well, while the dry and cold plants on the shady side all withered away. Even in the summer, there was snow on one side.

Because the fog was too heavy, Gulu couldn’t see the small Triceratops. He only vaguely saw a large feathered dinosaur on the hillside. How huge was it? It’s at least 9 meters long.

Such a big feathered dinosaur could only be a Yutyrannus! !! You are reading stolen text, if you read this at any other site besides idleturtle-translations.com. !!

An adult Yutyrannus was about 10 meters long and weighed about 1.5 tons. It’s the largest feathered dinosaur found so far. A Yutyrannus was covered with filamentous feathers, somewhat similar to the fluff on chickens. These feathers were mainly used to keep it warm.

Gulu wanted to go down and see if the little Triceratops was dead, but the hillside was too steep for him. He could try to go down as a human being, but Mungo would definitely not agree. It’s too dangerous.

Gulu wasn’t a “holy mother” who easily forgave the dinosaur that almost killed him. He just wanted to interrogate the Triceratops on its action. Why did it hurt him before, but try to save him now?