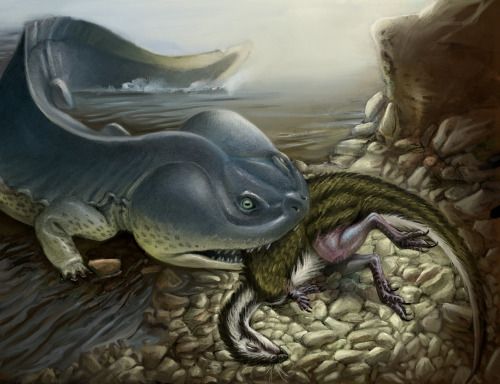 T/N: Good news! Maybe? To thank the people who had donated and all of my supportive readers (you guys 😉), I decided to do an extra release today.

For the future, I decided to change the progress bar to $20 per extra release. Donating and buying me coffee will both count toward the progress bar 🙂 Regular release schedule will remain the same on MWF.

Gulu had won many "winter swimming competitions" from various cities in the human world before.

Not only that, he was also good at Sanda, wrestling, grappling, snorkeling and so on. In addition, he's very proficient at using gun. His technique wasn't inferior to professional snipers. Therefore, he was called "the most hardcore professor".

In the human world, Gu Lu was an orphan. He never knew who his parents were. However, he had an adopted grandfather who loved him very much. All of his hardcore skills were taught by Grandpa Gu.

Grandpa Gu was a "special force" soldier and could pull out all kinds of skills from his body. In Gu Lu's heart, Grandpa Gu was his superhero. Gulu really enjoyed learning these techniques from him.

Strangely enough, Grandpa Gu died shortly before his accident. During that time, Gulu led an extremely painful life. It might be because of his unstable mood that he didn't notice the warning signs of landslide when heading to dig fossils.

After the death of Grandpa Gu, he had no relatives left in the human world. He increasingly focused more on searching for dinosaur fossils.

Once he was reborn into this dinosaur world, Gulu often thought that he might always meant to be here. He was sent to the human world first just to learn more knowledge in order to come back and help these lovely big dinosaur.

Nevertheless, Gulu felt very grateful that he took a trip to the human world and met such a good person as Grandpa Gu.

Gulu thought of Grandpa Gu as his fairy godfather. Grandpa Gu could do anything. He taught him a lot of skills that was even useful in the age of dinosaurs, such as now.

They had no other choice. The little Triceratops could only be saved if Gulu changed into his human form. He's very good at winter swimming.

He really must ask what this cub meant by wanting him death before only to end up saving him many times now.

Gulu spoke, "Mungo, I'm going to become a human and save this little Triceratops. Humans are very good at swimming in ice water, just like you Tyrannosaurus rex could easily crush prey. You don't have to worry about me, I'll come up soon … Please don't come down. You're too heavy. If you sink, I can't save you! Do you understand?"

Mungo fully understood, but he was still unwilling: "No, it's too dangerous!"

Gulu: "It's really not dangerous for human beings. When you bite a prey to death, is it dangerous? Mungo, believe me. I won't joke with my own life. He's not my favorite dinosaur. I won't risk my life for him …"

He must first convince Mungo that glaciers were too dangerous for Tyrannosaurus rex and he, as a human being, couldn't save a large dinosaur of Mungo's size.

Mungo really thought that humans were good at swimming in glaciers, just like Tyrannosaurus rex having strong bite force and pterosaurs being able to fly. They were born with the respective skills of their species. He finally nodded his head.

As a matter of fact, the potential of any animal could be exploited to the maximum extent. An average person couldn't swim in a glacier and would probably cramp from just falling into slightly colder water.

The same was true of dinosaurs. Normally, Triceratops and Tyrannosaurus rex wouldn't touch glaciers at all. It's very easy to cramp because of the extreme lower temperature when suddenly falling into glaciers. However, if they practiced hard, they could still swim in these glaciers.

Gulu immediately turned into a human and jumped in with a splash. The muscle memory of a human body was too strong. With his strong physique of being a professional winter swimmer for 22 years, he could freely move through this glacier.

Gulu recognized this super-large "aquatic creature" as a Yutyrannus with an enormous body size.

There were no terrible creatures living in glaciers during Cretaceous period. Sarcosuchus couldn't survive in such extreme cold environment. Koolasuchus (also known as Newt) would migrate to hibernate in the forest before the river froze, then return to the river when the water became warm again next spring.

It's because Gulu was very familiar with the Cretaceous ecological environment that he dared to become a human and dived into this glacier. Otherwise, he would definitely get eaten.

However, Gulu didn't expect a Yutyrannus to come to the glacier to look for food, which was generally impossible.

According to research, the outermost feather of Yutyrannus had "waterproof effect", just like modern ducks and geese. But there was nothing in the water that could feed its large body size. Why did it come here?

In any case, Yutyrannus was a very terrible carnivorous dinosaur. Just like the unshakable dominant position of Tyrannosaurus rex, Yutyrannus existed as "the top of the food chain" predator on ice and snow. Even a Dongbeititan was its prey.

Gulu "sneaked away" quickly. It's absolutely impossible for him to risk his own life to save a dinosaur who once harmed him.

Not too long after, Gulu surfaced and climbed ashore. He immediately changed into a Triceratops and said: "Mungo, let's run. There's a big dinosaur in the water. It's coming out."

Mungo wasn't afraid of any dinosaur. However, this place wasn't his familiar plains or his main battleground. For Gulu's absolute safety, he immediately let him climb onto his head and ran back.

There was a loud bang. Mungo stopped and turned around to look.

Gulu saw a huge Yutyrannus emerged from the water and climbed to the shore with just two or three steps. On its back was a small motionless Triceratops. It was unknown whether he's dead or temporarily unconscious.

This Yutyrannus didn't directly eat the Triceratops, which shocked Gulu. Even if it wasn't convenient to feed in the water, it could still bite the prey with its mouth and didn't have to camel him on its back.

Even if a carnivorous dinosaur wasn't ready to eat its prey for the time being, it would still bite the prey with its mouth very badly to prevent the prey from escaping in case it hadn't yet die.

Gulu saw that this Yutyrannus was very angry.

Mungo wasn't afraid of any big dinosaur. When the dry season came and the prey was in serious shortage, Mungo once brought his brothers here to hunt these fluffy big dinosaurs. The meat of these dinosaurs was very delicious, except that they came with a mouthful of feathers with every bite, which he didn't like very much.

Mungo issued a roar to the Yutyrannus.

A Yutyrannus was certainly no match for a Tyrannosaurus rex, but he still gave them angry glares. He also roared and growled, "I knew Kangkang shouldn't have saved you! Gulu, Mungo, you've gone too far. Even if Kangkang almost killed Gulu before, he already saved you twice. Can't you let him go? …"

Mungo and Gulu both looked stunned.

Gulu: Big Yutyrannus, do you still remember that you eat meat?! How can you make friends with your food?! Don't all of you meat-eating dinosaurs say that our Triceratops meat is the best?!

On second thought, this little Triceratops may have taken the "Long Aotian script". Previously in the forest, there were so many small feathered dinosaurs helping him. Now, there's even a Yutyrannus. Didn't this seem very strange?!

Gulu wasn't surprised that this dinosaur knew himself and Mungo. There was probably no dinosaur in the whole continent of Yukan who didn't know both of them.

Then Gulu spoke, "Big dinosaur, you stop being so fierce first. I don't want him to die either. As you saw just now, I also jumped into the glacier to save him."

Yutyrannus calmed down a little, then became anxious: "What should I do now? He's dead! He's not moving. I can't bear to eat him. Gulu, you are very bad! Why didn't you fall to death at that time!"

Gulu looked at the little Triceratops and saw his stomach slightly heaving. He should still be breathing. Gulu hurriedly offered, "I can save him. If you believe me, let me save him."

The Yutyrannus also had no other way. He slowly squatted down and laid the small Triceratops on the ground.

Gulu: "Mungo, I want to save him, I need to try. Otherwise, I'll feel very uncomfortable."

Mungo wasn't afraid of this long-haired dinosaur at all. He put Gulu on the ground then completely blocked the Yutyrannus behind him to ensure Gulu's absolutely safe.

Gulu became a human being. He pressed the stomach of the lying down small Triceratops to do  "pulmonary resuscitation".

Soon, the Triceratops vomited a few mouthful of water, gasped and woke up.

The Yutyrannus was overjoyed. He scampered around a few times and said, "He's really awake! I didn't expect you to be so good, Gulu!"

Gulu also changed back to a Triceratops.

The little Triceratops looked at Gulu and felt very guilty. After all, he almost killed Gulu. He could never forgive himself for almost killing Pado's son!

Gulu immediately asked a series of questions: "What's your name? Why did you bump me off the cliff before? Who let you do this? Which ethnic group of Triceratops did you come from?"

The little Triceratops was too cold and was trembling all over. His shaking voice answered, "I, I, I did because …"

The Yutyrannus hurriedly shook the water off its feather. Mungo, who was splashed with the ice water, roared and wanted to bite off the neck of this Yutyrannus. Of course, he refrained.

Gulu saw that his huge damp pile of fluffs had weighed at least two tons or so. Once he dumped off all the water, his feathers suddenly became dry. Their waterproof property was really good.

It's understandable. This huge pile of fluffs was used to live in a very cold place, full of snow and ice. If these feathers weren't waterproof, its owner would have frozen to death long ago despite their ability to preserve heat.

In general, long-haired animals, especially those with feathers on the surface to keep warm must have strong waterproof ability to survive here.

The Yutyrannus spoke: "He's too cold. Let him warm up in my feathers."

Gulu saw the Yutyrannus lying down while the little Triceratops climbed onto his back to sit. After a few arches of his butts, he quickly plunged his whole body into thick feathers, leaving only one head exposed. The little Triceratops instantly became warm and no longer trembled.

At this moment, Gulu was so envious because he also wanted to be buried in such thick feathers. What a blessing!

← BAD Chapter 44: A guardian's overwhelming favor for his small chubby and greedy dinosaur (2) ← BAD Chapter 45: Gulu: Big brother, I'm not a fool! (2)
%d bloggers like this: