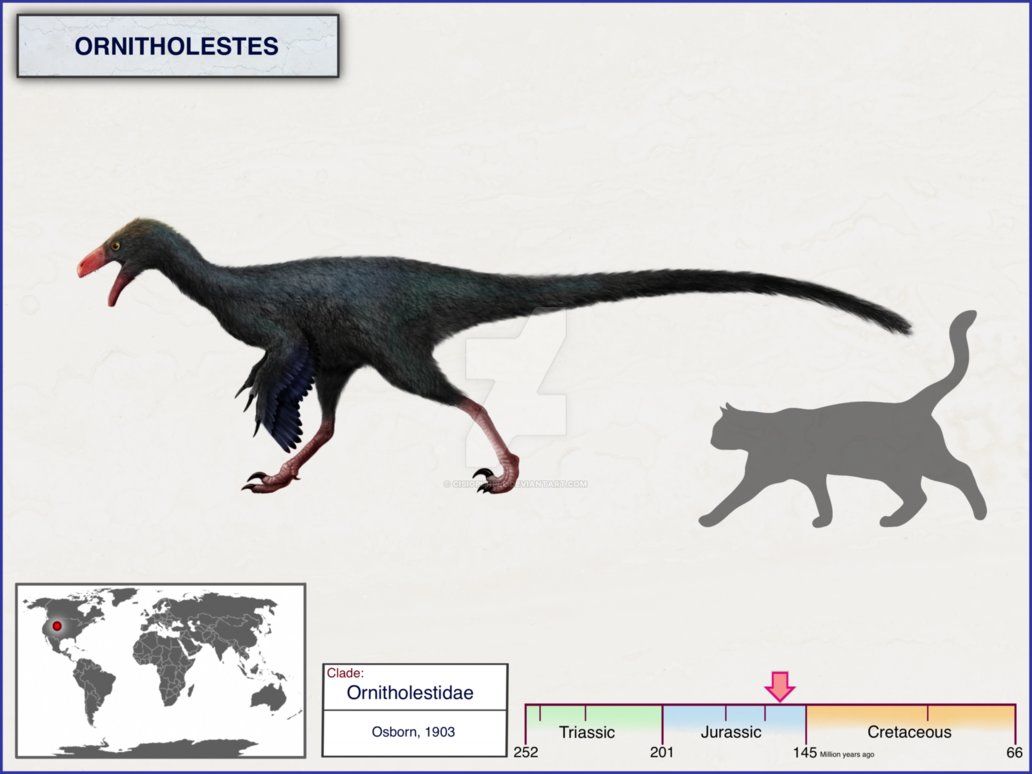 Besides, Gulu was also very cold. The human body was connected with the dinosaur body. Just now, he was exposed to the cold water for a long time and now shivered uncontrollably.

Of course, the little Triceratops saw that Gulu was also cold. He hurriedly said, "Jue, can you let Gulu into your feathers? He's going to freeze."

Gulu didn't know until then that this Yutyrannus was called Jue. He seemed to have heard this name somewhere before.

Gulu looked at Mungo. Mungo nodded his head. He's not afraid that the big dinosaur would hurt Gulu. He could snap the other dinosaur's neck with one bite.

Gulu with his eyes full of stars couldn't wait to climb up. He learned from the little Triceratops. After a few arches of his butts, he soon fell into a thick fluff leaving only one exposed head.

God! The feathers of Yutyrannus were really as comfortable as the fluff on chickens. The outermost waterproof feathers were smooth. The feather layer underneath also wasn't hard, but very soft and felt really good.

Gulu and Kangkang were Triceratops cubs. They really appeared too small compared to the 2-ton Yutyrannus. When they sat on the back of Jue, they looked just like chicks sitting on the back of a cattle.

The body of Yutyrannus was very warm. After a while, the two of them no longer felt cold.

Gulu narrowed his eyes happily: It seems that dinosaurs who often live in cold places do have much better ability to regulate their own temperatures!

Mungo: … I feel that Gulu likes this long-haired dinosaur very much. Why can't I have long hair?

Gulu: "You haven't answered my question."

In fact, Kangkang had already thought it over. If Gulu found him one day and asked him these questions, how should he answer them? However, no matter how many times he practiced before, lying still made him nervous.

Therefore, he was very sure that Heili wouldn't harm Gulu anymore,. Heili also had no more ability to harm Gulu.

Gulu obviously wasn't satisfied with the answer: "Why?!"

Kangkang looked at Mungo and said nervously, "Because Mungo ate my Dad and Mom. I have no parents. I can't beat Mungo, so I want to knock you down …"

For this answer, Gulu thought it's more credible.

Mungo became very incensed. He roared and opened his mouth to eat this little Triceratops. Gulu quickly stopped him.

Mungo ran back and forth in anger as he kept making loud roars. All nearby feathered dinosaurs, Dongbeititans and Jinzhousaurus were scared away.

Gulu asked again, "Then why did you want to save us?! You saved us twice!"

Kangkang: "Because I know that you are Pado's son. Pado once saved me. I didn't know you were Pado's son when I hit you down the cliff."

Gulu: "Then why aren't you in Misa's group now?"

Kangkang: "Because the ethnic group had no food after Misa died. I didn't eat enough. Once, when I was looking for food outside, the ethnic group went away, but I couldn't find them. I got lost and went into the forest without knowing…."

After that, Kangkang retold his adventures in the forest and how he knew this Yutyrannus. At this point, his story had no more fabrications. He became more comfortable speaking about them.

Gulu sighed after hearing this: This Kangkang indeed took the "Long Aotian script"! His parents died when he was a child. He also tried to kill the son of his enemy as revenge…He didn't even die after meeting so many dangers?! It's really the favored son of heaven!

Kangkang: "Gulu, Pado has treated me the best since my parents passed away. Without him, I would have died long ago. Even if Pado didn't remember helping me, I will never forget … But I almost killed you. You can do whatever you want me to do. You can let Mungo kill me now."

Gulu thought for a moment. This little Triceratops saved him and Mungo twice. He couldn't let Mungo bite him to death, but Gulu also didn't want to make friends with him either. He really almost died when he fell off that cliff!

Gulu spoke, "You saved me and Mungo twice, so we'll call it even. Don't appear in front of me again, or I'll kill you!"

By this time, it's almost evening. They should also go back. Mungo lowered his head. Gulu reluctantly parted from the Yutyrannus's fluffy back to climb up his head.

Mungo walked quickly. Meanwhile, Gulu kept looking back at the Triceratops and the Yutyrannus.

However, Gulu didn't care. Who let this little Triceratops almost kill him? It's just very rare for a Triceratops cub to have such a strong sense of revenge. He could come up with a plan to kill him in that way, which showed his unique intelligence as a Triceratops.

What made Gulu most regretful was that he would never have the chance to get on a Yutyrannus again. He really wanted to become a human and buried himself in such a big pile of comfortable fluff.

Because Mungo walked very fast, they left Nanshan in a short time. After crossing the dividing line of the mountains, he suddenly felt warm again.

In order to get back to their nest, they still had to walk through a large and lush forest.

Gulu had not taken the Triceratops incident to heart. The past had passed, but Mungo still held a grudge. He whispered, "I'll eat him. Eat him. Eat him. I'll eat all dinosaurs …"

Gulu knew that Mungo meant to eat all dinosaurs that dared to hurt him. Mungo was really too calm to easily burst into anger. However, once his fuse was lit, it would be extremely hard to extinguish it. His anger would then be shooting off the chart.

He comforted Mungo: "Well, if you meet another dinosaur that dares to eat me, you can bite it …"

It took some time before Mungo calmed down a little.

When they reached the edge of the forest, Gulu saw a nest of Diplodocus eggs breaking their shells. He wanted to see if these little guys could survive independently after coming out. If they could, they were really tough.

So he spoke, "Mungo, wait a minute. Go behind the big tree over there and don't scare the little dinosaur cubs."

Mungo knew that Gulu liked to watch all kinds of dinosaurs since he was young. He would naturally satisfy Gulu and walked behind the big tree.

Gulu sat on Mungo's head and hid behind a big trunk to see the Diplodocuses not far away.

The setting sun passed through the thick leaves and shone on the young ones who rushed out of the eggshells. Through the mottled light from the tree, these huge eggshells and young ones appeared golden yellow, just like a beautiful oil painting.

A Diplodocus's egg was almost as big as a football. There were almost 120 eggs in this big nest, 80% of which had hatched.

The nest was covered with a thick layer of fern plants, which had already dried up. They were laid by the Diplodocus mother three months ago when she laid eggs here.

Diplodocus was the kind of dinosaur that "just gave birth and didn't care about raising". After laying eggs, a female Diplodocus would hide her nest with thick fern plants. After that, she never cared about these eggs again. Whether they hatched or not was up to themselves.

If an egg-stealing dinosaur found and destroyed her entire nest of eggs, she could only blame her young ones for their bad luck.

Gulu knew that a female Diplodocus would choose to lay eggs at the edge of the forest. An adult Diplodocus was very large and weighted 25 tons. They only went into the forest when laying eggs. Such a huge dinosaur couldn't move freely among so many trees.

Laying eggs at the edge of the forest was to let the lush forest itself protect these young cubs. After all, they only cared about laying and not raising.

Herbivorous dinosaurs all chose the forest as their best place to lay eggs. The super egg-laying center of the Argentinosaurus that Gulu saw was also a clearing inside the forest.

Dense forests made it easy for small dinosaurs to hide. Large carnivorous dinosaurs seldom came to the forests for food. This increased the survival rate of their young ones.

Now Gulu saw a litter of Diplodocus cubs crowding out of their eggshells. Once they landed, they must learn to run at full speed to avoid predators.

These Diplodocus cubs were small. As newly hatched cubs, they only weighed a few kilograms and were no more than 50 centimeters long. They needed a year to grow to one ton before they reached adulthood.

Gulu counted about one hundred young Diplodocus cubs, who were breaking their shells. Diplodocuses definitely won by number. One hundred cubs were born in a litter. Even if most of them died, a few would still survive.

Ornitholestes were about two meters in length. They were dinosaurs with the closest ancestry to birds. Generally speaking, they preyed on small lizards and mammals. Of course, they also ate newly-hatched dinosaur cubs.

Three Ornitholestes rushed to the nest and ate a few Diplodocus cubs in one bite. In a short time, they ate 30 or 40 of them.

Gulu was stunned. The mortality rate was already 30%-40% just after breaking the shell! This didn't even include those who were destroyed inside the eggs.

While these Ornitholestes were eating their brothers and sisters in the same nest, the rest of the Diplodocus cubs frantically squeezed out of their eggshells and ran desperately into the lush forest as soon as they landed.

The instinct of survival made these young cubs know that running into the dense forest was their best chance to avoid these predators, even if they just broke the shell and had no parents to teach them.

The forest was lined with tall redwoods and gingko trees. The ground was also covered with luxuriant ferns. If these young cubs who just left their shells wanted to survive, they could only use the forest to escape their predators.

The Ornitholestes stopped chasing the rest of the Diplodocus cubs after they're full. Those few lucky little ones finally managed to survive their first life-and-death experience just after birth.

Diplodocus cubs lived entirely by "luck". After breaking the shell, they relied entirely on "luck" to walk in Jianghu. A little cub without parental care was so miserable because it would most likely die by itself.

Gulu, of course, pitied these newborn babies, but he wouldn't ask Mungo to help them. Every species had its own survival rules.

After the Diplodocus cubs ran away, Gulu stopped looking. He believed that many of them would come out of the forest in a few months. Even if they escaped now, only a very lucky few could survive till the end.