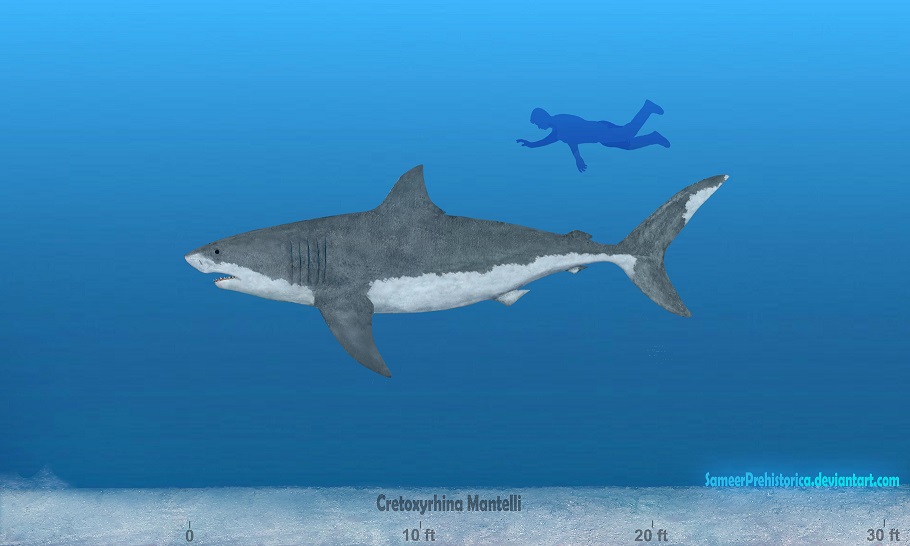 Dark and Cang were very anxious to swim to their cubs. Since they were too large, they couldn't save their cubs because they were blocked by the coral reefs. They issued loud "wuwu" in an attempt to frighten the two Liopleurodons.

The two Liopleurodons no longer fought. Instead, they swam forward as if to goad each other: "If you can, you'd better smash the coral reef or knock the young ones into my mouth!"

Gulu's and Shenshen's speed was faster than the Liopleurodons. Soon, they swam to the hole. In fact, Gulu could directly drill through the hole, but Shenshen couldn't.

Gulu desperately tried to break the coral reef. Dark and Cang on the opposite side were all very anxious, but they couldn't help Gulu.

Seeing the Liopleurodons getting closer and closer to them, Gulu used the greatest strength in his life. With a loud bang, the hole finally broke and the two swam out together!

If Gulu hadn't exercise regularly and possessed amazing arm strength, he would never have the ability to break such a thick coral reef in the sea. He felt very grateful for training so many practical survival skills as a human being.

The two finally reached Dark and Cang. Gulu immediately fell on and held Dark's forelimb, so that he could save a lot of movement energy and be in the safest area.

Shenshen was so scared. If Brother hadn't broken this hard stone, he would have been eaten already!

The Liopleurodons fled immediately when they saw that they couldn't eat the cubs. They didn't want to fight with such a big Mosasaurus and pliosaur.

Shenshen and Gulu were still in shock. Cang and Dark kept making loud wuwu. This was their warning to the two Liopleurodons: If it wasn't for the small cubs being around today, I will definitely have eaten you!

The two Liopleurodons got away from them and started fighting each other again.

Gulu found that the two fighting Liopleurodons were male and female. It should be the female who broke into the territory of the male Liopleurodon to hunt before being expelled. They should be competing for the Cretoxyrhina that was bitten into two pieces.

Cretoxyrhina was one of the main food of pliosaur and Mesosaurus.

Liopleurodon had a very strong sense of territory. If other Liopleurodons enter its territory, it would drive them away. However, if they were females, they may not be driven away. After all, besides eating, it still needed to reproduce.

But obviously, this male Liopleurodon thought that food was more important than reproduction!

Gulu: It seems that there are more than one steel straight dinosaurs like Cang. What is the matter with these marine creatures? How can they all regard their prey as more important than their females?!

Although prey wasn't easy to get, females were even more difficult to meet. Obviously, females were very much needed many times, but the temptation of food always triumphed.

Gulu could hardly understand the brain circuits of these large creatures in the sea. They would rather stay single for a lifetime to protect their food!

Then Gulu saw that in order to protect his food, the male even bit the fin limb of the female. In an instant, the fin limb was half bitten, and the smell of blood quickly spread.

Gulu: F***! This is even crueler than Cang! It's more than a matter of staying single!

Cang and Dark were certainly not afraid of Liopleurodon, but with two young ones around them, they chose to swim away.

Gulu patted Dark's forelimb, which meant that he wanted to be sent back to the seaside.

Along the way, Gulu saw many wonders, especially all kinds of sharks. They're so abundant that it's uncalled for to compete with the female Mosasaurus!

Male sharks would hunt in holes full of aquatic plants and algae by biting open the shells of large clams and ate their meat. The broken piece entered one mouth and killed this big fish alive…

Gulu felt that he would never be able to look straight at the big fish that died with its mouths open. It's really too miserable.

There're even bigger male sharks in the reefs, deep ditches and rocks in the sea. Gulu would like to ask: Does it really hurt?!

Soon Cang and Dark escorted Gulu to the sea, but it's still a little far from the beach where Mungo waited for him.

After getting out of the sea, Gulu climbed directly onto Dark's head. He stroked Dark's big head and asked, "Did you and Cang get hurt in the fight with that female dinosaur?!"

Cang: "How can I get hurt? And I will never let Dark be injured, but you scare me to death just now…"

At this time, Shenshen came back to his sense. He's not scared of anything in the sea. He's just afraid that when his Dad and Uncle Cang were not around, he would meet a Liopleurodon. That dinosaur was specially designed to eat young dinosaur like him, which was horrible.

Shenshen frantically rubbed Gulu and asked: "Brother, Brother, why are you so strong? You must be transformed from a sea god. You opened such a hard coral reef in one fell swoop. Without you, I would have been eaten. Wu wu, how terrible…"

Cang: "Gulu, thank you. You can ask Dark and me for anything."

Gulu hurriedly replied: "Don't thank me, I'm embarrassed…Don't tell Mungo that we were in danger before. Don't tell him…"

After repeated explanations and requests from Gulu, Dark and Cang finally promised not to say anything besides that the sea was fun.

Dark and Cang carried Gulu across a large area of the sea. Gulu patted Shenshen's soft frontal lobe for fun. It's also his air outlet (blowhole). It would emit seawater. He found out that Shenshen liked to be touched by him.

Gulu saw that the area where the Q-bomb was couldn't be found on the top head of a pliosaur of Dark's size. His area became very hard. This was probably a unique feature of young marine cubs or young Pliosaurus funkei.

Cassie and Nada had been hovering over this sea area while waiting for Gulu to come out of the sea. As soon as Gulu came out of the sea, they saw it and flew there immediately.

Mungo saw Gulu from a distance. He went into the sea to meet Gulu and didn't stop until the sea covered his forelimbs.

The sea was calm in the evening. The red sunset put a golden coat on the blue sea. At this time, the sea was sparkling like shining stars.

White clouds as plump as cotton candy were hanging in the clear blue sky, but on the coastline there was a piece of flaming cloud surging up in the sky. The sun glow penetrated through the flaming cloud and shone on the sea. It's red and rippled with the waves. The sea and sky reflected one another. It wasn't clear whether the clouds or the sea were rippling.

The sunset over the sea of clouds was like an oil painting of great color.

On the surface of the sea, two big dinosaurs paused with a human being on their backs and a little dinosaur lying on their sides. Above the human flew two incomparably large Quetzalcoatluses. They seemed to have no intention of intruding into this painting of "the sea of clouds amidst the setting sun", which gave the picture vitality and indescribable magnificence.

The sea reflected the blue sky and white clouds. The shiny waves were like millions of stars. Gulu felt as if he was traveling in the boundless Milky Way on a big dinosaur. There're also two mighty pterosaurs escorting him, while Mungo stood in the "sea of stars" in the distance to meet his "god of war". It's simply too beautiful.

Soon, Dark and Cang brought Gulu to Mungo's side.

Dark: "Gulu, you can come anytime you want."

Cang: "Gulu, you can tell me whatever you want to do."

Gulu kept nodding and stroked the heads of two big dinosaurs and one little dinosaur.

They talked for a long time until night fell. Gulu climbed up Mungo's head as Mungo took him back.

Dark, Cang and Shenshen watched Mungo and Gulu leave, starting from when they came out of the water, moving onto the shore to walking out of the beach. Only when they could no longer see them did the three return to the deep sea.

Gulu was tired and didn't want to move on Mungo's back. He told Mungo intermittently about the interesting things that happened in the sea. Of course, he hid the dangerous part.

Cassie and Nada didn't follow them and went back to the cave.

At night, the summer heat receded, and the sea breeze was blowing gently. At this time, the scales became very warm and moist. They're no longer as cold as during the day. Gulu was very comfortable lying down. The temperature of dinosaurs would change with the environment and its adjustment ability was especially strong.

Gulu: "Mungo, let me tell you, all dinosaurs in the sea are unrestrained. A female Mosasaurus, do you know what she was doing, she was…"

Mungo listened to what Gulu said. He could hardly imagine that the dinosaur in the sea was like this?

At this point, Gulu fell asleep. He's too tired. Mungo walked very smoothly. His back was so broad that Gulu couldn't fall down even if he rolled in his sleep.

When they reached the nest, Gulu woke up because of hunger from too much exercise in the sea this afternoon.

He immediately let his consciousness return to the dinosaur's body. At the same time, he stored his human body back into the space, then let Mungo take him to eat all kinds of delicious leaves.

After eating, Gulu went back to his nest to sleep. He's too tired today.