BAD Chapter 73: The Tyrannosaurus rex's five-star service has been arranged (2) 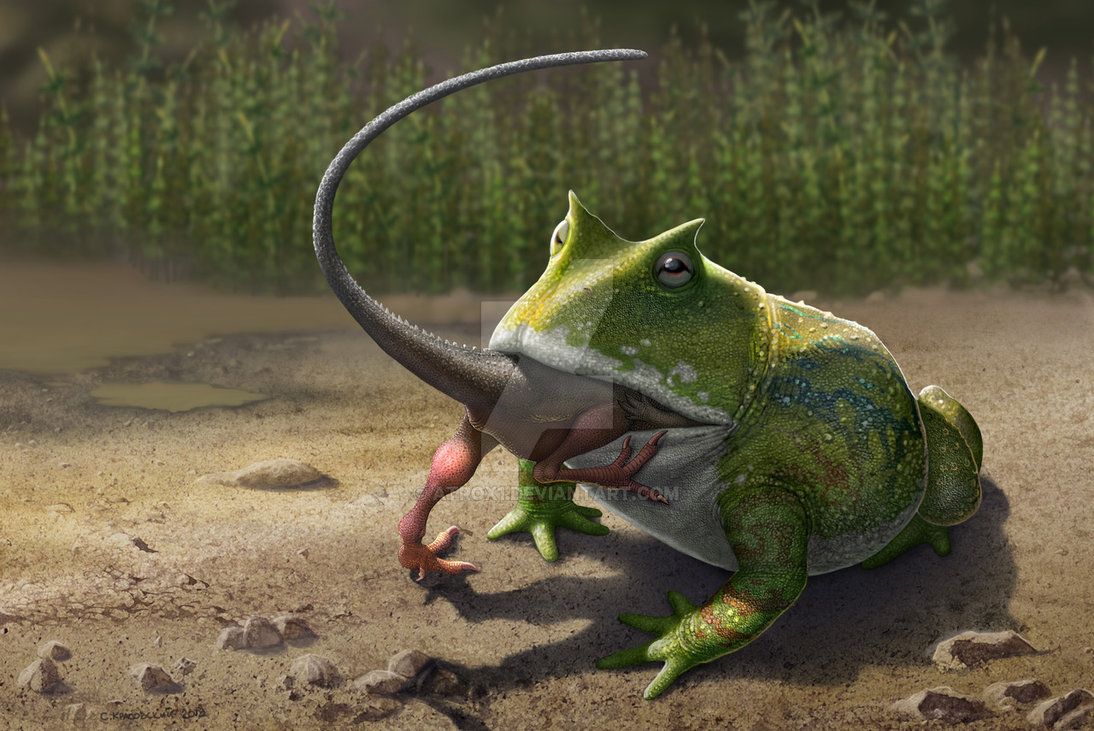 Heita bit his forelimb and tore it down to eat with his mouth. Gulu felt painful just looking at it.

Tyrannosaurus rex were famous for their short forelimbs. Generally speaking, their mouth couldn't reach their forelimbs, but the forelimbs on both sides of Heita were cut by the Diplodocus. Only one tendon was attached to them. After pulling far away, Heita could eat his forelimbs with his mouth open.

After eating his forelimbs, Heita began to eat the meat on the ground.

While walking, Mungo educated the young cubs, using the living example of Heita to teach them not to provoke any dinosaur they couldn't win, especially not when they didn't have the ability to protect themselves in advance.

When Heita was still the strongest cub, Ulam would give him the most maternal love, but when he was injured and it became clear that he couldn't survive, Ulam didn't hesitate to abandon him.

Mungo and Gaya were not afraid that the young cubs would have a psychological shadow after they saw the horror of Heita. In the dinosaur world, if they were not strong enough or good enough at protecting themselves, they may end up worse than Heita.

As Tyrannosaurus rex, the cubs had seen worse scene than this. They often ate their prey while it was still alive. Their prey was worse than Heita, so they would never sympathize.

Only Gulu, as a human being, had a human way of thinking. At the same time, Heita was a small cub of the dinosaur that he knows, which made him feel more shocking. However, he had long been accustomed to these things.

Gulu knew that Heita would soon die. If he didn't die from the heavy injury, he would be killed by other carnivorous dinosaurs.

They walked on until late at night.

Mungo took Gulu to eat ferns several times during the trip. He only needed to see fern plants with less volcanic ashes to let Gulu eat. Gulu ate a lot. Mungo couldn't bear to starve him.

Mungo chose a small valley as a resting place. The lush forests covered most of the volcanic ashes. There're relatively many clean ferns, which Gulu could eat whenever he wanted.

After choosing a resting place, Mungo left Munroe to take care of the cubs. Mungo didn't want Gaya to become unfamiliar with her hunting skills because she lived in his group and didn't have to worry about food, so Gaya often went hunting with them.

Gulu was very full after eating some ferns, mainly because he ate so much along the way. Now, he really couldn't eat anymore.

Munroe laid down beside the cubs and watched them running not far away.

The night was already very deep. There were dark patches everywhere, mainly because it's already dark at night, but now it's even darker with the volcanic ashes blocking the starlight. Human beings would be blind in this environment.

Fortunately, Triceratops and Tyrannosaurus rex had good eyesight. They had no problem hunting or eating at night.

Today's journey was too long. The four cubs were tired, so they laid down together to rest.

Here was the deep forest. From time to time, there're some feathered dinosaurs and various smaller dinosaurs running in front of them.

Gulu saw two Sinosauropteryx hunting an Epidexipteryx not far away.

Sinosauropteryx was the smallest carnivorous dinosaur known in human studies, equivalent to a reduced version of a velociraptor. It's only 0.5 meter high and weighed 4 Jin. It walked upright, had razor-like claws with sickle-like claws on its toes.

Because it's too small, Sinosauropteryx couldn't survive on the plains where many large dinosaurs gathered. They usually lived in swamps or forests to hunt for food. They mainly ate insects, small mammals and young dinosaurs.

There was no doubt that an Epidexipteryx, which was only the size of dove, was the most delicious food of Sinosauropteryx.

The Epidexipteryx ran like mad. Two Sinosauropteryx were frenziedly chasing after it.

Gulu saw the Epidexipteryx standing on the branch and angrily smiling at the Sinosauropteryx under the tree while chirping: "Come up, if you can. I will peck you to death, peck you to death. You dare to pull off my feathers. I won't let you off…"

The Sinosauropteryx couldn't climb trees. They stood under the tree and retorted to the Epidexipteryx, "You can come down, little broken bird. Do you dare to come down?"

(T/N: In Chapter 33, the author described Sinosauropteryx as being one meter long and can climb up and glide down from trees. I think the description here fits them better, which means that the author probably wrote the wrong dinosaur back then. I did check to make sure that they're the same Chinese characters and they are.)

Gulu thought that it's quite interesting to watch these little dinosaurs hunt and quarrel sometimes. It's his little entertainment at night.

Suddenly the loudest Sinosauropteryx was swept away by a huge tongue and disappeared in a blink of an eye.

The tongue was so big and fast that they never saw it coming.

Gulu looked to the side and saw a very big black frog completely mixed in with the darkness!

The Sinosauropteryx that was eaten by the black frog had only its head and hind legs exposed. The black frog croaked twice then swallowed it completely.

Gulu knew that there was a special large frog called Devil Frog during the dinosaur period. This must be the Devil Frog.

The Devil Frog weighed about 15 kilograms and was about one meter long. Meanwhile, the largest frog in the 21st century weighed only 6 kilograms. The Devil Frog had teeth and looked very scary. It preyed on lizards, various small dinosaurs and dinosaur cubs.

The other Sinosauropteryx wanted to run, but the devil frog already lashed out its terrible tongue and immediately rolled it into its mouth.

After feeding on two Sinosauropteryx, the devil frog croaked contentedly and jumped off.

Gulu used to live in the plains and rarely saw the Devil Frog, which usually came out late at night to hunt for food. This was the first time that he saw it. He thought that it's very novel.

The Epidexipteryx on the tree stood proudly while chirping: "Deserve it, deserve it! Who let you pull off my feathers!"

Gulu realized that the Epidexipteryx should have seen the Devil Frog after it climbed the tree. It deliberately provoked the two Sinosauropteryx to let them relax their vigilance against danger, so that the Devil Frog could successfully eat them.

Gulu felt that feathered dinosaurs were very clever. This Epidexipteryx had many schemes.

Before long, Mungo and his team succeeded in hunting and returned with their prey.

After eating, all dinosaurs went to bed at once. They still had to get up early the next day.

Gulu had a stomachache after falling asleep for a while.

Mungo and Gaya woke up immediately. They were running around Gulu and didn't know what to do.

Gulu knew that he must have loose bowels. Today, his belly was obviously much smaller. Now it's time to discharge the ashes from his stomach. As long as the ashes were discharged, his belly would return to its original shape.

Mungo and Gaya immediately accompanied Gulu to the side to help him pull down.

Gulu didn't even know how long he pulled (T/N: poop). Anyway, it's a long time. He pulled down a hill of volcanic ashes.

Mungo and Gaya had been with him. Gulu felt so smelly. He didn't want Mungo and Gaya to accompany him. There're many other places where they could stand guard to prevent other dinosaurs from approaching.

But Gaya and Mungo didn't heed him.

It wasn't until early in the morning, when the sky became slightly bright that Gulu finally finished pulling. His stomach finally recovered.

Now, Gulu was hungry, but there're already many ferns plants in this valley chosen by Mungo. These ferns had less volcanic ashes.

Soon, Gulu ate all ferns in the valley until he was full.

After eating, Gulu wanted to sleep. Mungo and Gaya, of course, accompanied him to sleep. They also didn't sleep all night.

The three younger Tyrannosaurus rex brothers were very sensible. They knew that their brother seemed to have loose bowels last night and slept very late. They woke up quietly and didn't disturb their brother's rest.

Gulu didn't sleep very soundly. He always moved around. Perhaps because he suddenly lost his big belly and wasn't used to it, he slept very shallowly. He would wake up if he heard a little bigger noise.

By this time, it's already dawn. All kinds of dinosaurs were up and moving. The most annoying thing was that there was a dinosaur in the valley that didn't know what kind of species it was. It kept screeching above their heads.

They slept in the valley. The dinosaur was screeching halfway up the mountain. It kept screeching and running around, making 3-D surround sounds. Gulu turned over and over to ignore its cries.

Mungo knew that Gulu couldn't sleep with the dinosaur noise. He immediately ran halfway up the mountain and bit off the dinosaur's head with one bite.

Because Mungo bit off its head while it was in the process of running, after it lost its head, it still ran a long way before falling down. It seemed to not realize that its head was gone…

When Mungo returned, Gulu smelled the blood in Mungo's mouth and found that the 3-D surround sounds dinosaur overhead had disappeared.

Gulu guessed that Mungo should have killed the dinosaur that kept on screeching.

In fact, few carnivorous dinosaurs killed another dinosaur when they didn't need to eat like Mungo, but Mungo often did this. He directly bit to death any dinosaur that he didn't like. What's more, this dinosaur had cost Mungo his sleep.

Gulu had become accustomed to it. Anyway, he liked Mungo very much. He snuggled up to Mungo and fell asleep after a while.

They didn't get up until noon to continue their journey.

In this way, they ate, slept then continued on their way. One didn't know how many days passed before they started to obviously feel that the ashes in the air were becoming less. The sky also became brighter during the day.

This morning, when Gulu woke up, the sun was bright and dazzling.

They finally got out of the volcanic ash cover!

It's already night when they arrived here last night. He couldn't feel it clearly. Now that the sun came out, he saw it. Only the dazzling sun could prove that the ash content in the air was now negligible.

Gulu had never felt that the blue sky and white clouds, the sun that one couldn't look directly at and the birds and flowers were so fascinating!

They were still in the forest. Outside the forest was an endless fern plains, a very fresh and tender fern plains.

BUN Chapter 18: Waiting for You, Breakfast

RSE Chapter 36: Stimulation and danger are […]