BAD Chapter 73: The Tyrannosaurus rex's five-star service has been arranged (3) 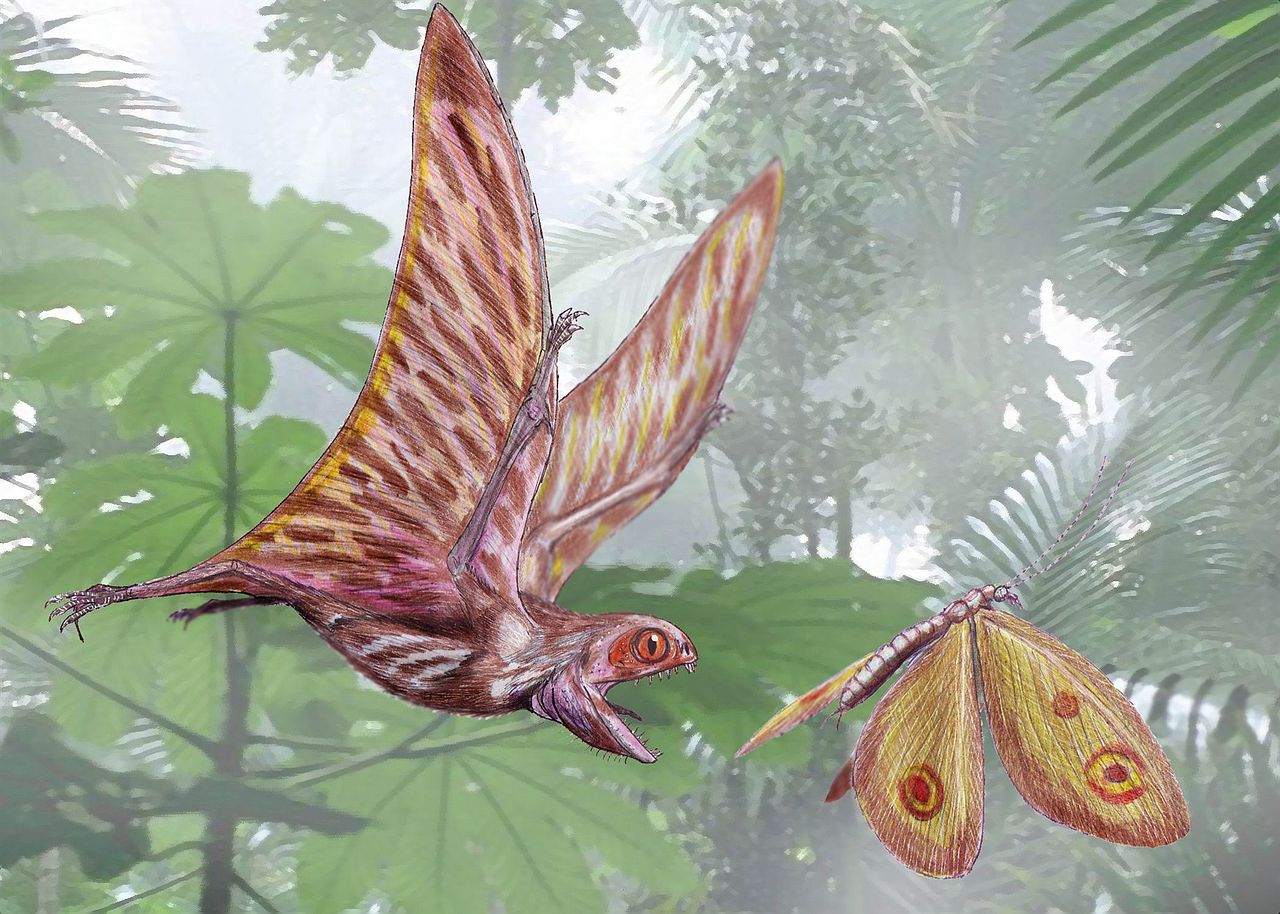 The fern plants here were very fertile. There were no ashes at all. Gulu's entire dinosaur body jumped in and rolled amidst these ferns while eating. He was happy enough to fly.

Guji, Gudong and Guga also rolled like Gulu in the fern field and ate a few mouthfuls of ferns. Of course, they tasted very bad, but they just wanted to play like their brother and ate like him.

Not long after, Gulu ate the large fern field bald. He ate till full then laid on his back looking at the blue sky and white clouds. The three Tyrannosaurus rex brothers laid beside him. Everything was so beautiful.

Nassau, of course, followed Gulu's advice and flew directly across the sea. He should had flown far ahead by now.

A Triceratops group was eating near the fern field where Gulu was eating. Mungo asked Moluo to take care of the three cubs while he took Gaya hunting.

Gulu knew that even if Mungo's group waited in place and didn't move forward, they would have to wait at least five or six days for Pado's group to catch up to them.

Soon, Mungo and his team hunted an adult Protoceratops.

After eating, Mungo took a rest before quickly moving on with his group.

It took them almost an entire afternoon to cross the fern plains and reach the edge of another forest.

At this time, the sun was big and hot. Mungo took everyone to rest in the forest.

A dozen Tyrannosaurus rex lined up after their lunch break with their big mouths open.

In a short time, more than 20 birds were attracted to them.

As long as Tyrannosaurus rex opened their mouths to sleep, they attracted these birds to help them "pick their teeth".

However, many Tyrannosaurus rex actually didn't welcome these birds, because they often didn't have enough to eat. The meat on their teeth was also leftover meat. When hungry, they could still taste some.

There're also some Tyrannosaurus rex that didn't welcome these birds because of laziness, simply because they're lazy. Of course, sleeping with an open mouth wasn't as comfortable as with a closed mouth. Besides, the sound of these birds twittering was very annoying.

As the result, many Tyrannosaurus rex's mouths were very smelly. With their mouthful of dense teeth that ate a lot of meat every day without brushing their teeth, they were definitely smelly.

Mungo didn't like these birds picking his teeth before, but since Gulu said that his mouth was a little smelly, he often let the birds secretly peck the remaining meat in his mouth behind Gulu's back.

Therefore, Gulu seldom saw Mungo and his brothers let the birds picked their teeth. Most male Tyrannosaurus rex didn't care much about the smell of their mouth, so they didn't bother to pick their teeth.

Gulu had only seen Gaya cleaned her teeth.

This was his first time seeing so many Tyrannosaurus rex letting the birds picking their teeth together.

The main cause came from what Gulu said to Mungo two nights ago: "Mungo, you haven't let the birds pick your teeth for a long time? When we get out of here, you should let them pick your teeth and your brothers'. Their mouths are really smelly…"

In fact, Gulu's words were very polite. They weren't just a bit smelly but could directly faint a human being. It's just that dinosaurs had strong tolerance and could filter out most of the bad smells. Their bad breathes weren't anything.

Because of this, Mungo directly ordered his brothers to open their mouths to sleep today.

Tyrannosaurus rex who didn't let their teeth be picked for a long time would end up with decay teeth that grew parasites. Gulu was also telling them for their own good.

Consequently, more than 20 birds happily ate a lot of meat.

Mungo's brothers also felt comfortable letting their teeth be picked for the first time. Their teeth were no longer filled with meat everywhere, so they felt very comfortable.

The "service" of these birds was very good. First of all, they're very quiet. Even with more than 20 birds, there was only the sound of eating with no other chirping noises.

Compared with other noisy birds, the birds in this team really offered a five-star service. Gulu would like to say to them, "If you can keep up this kind of service, they will order you again next time!"

The leading bird looked very fat and was pure white. It seemed as if it often served Mungo. It seemed to know where all of Mungo's spots were. It's very careful, as if afraid to annoy him.

Gulu was lying next to Mungo. He couldn't help but say to the white bird in the lead, "Do you often pick Mungo's teeth?"

The fat white bird nodded slightly for Gulu and replied: "Yes, Gulu, I like you very much, eh, but Mungo doesn't like noise. I shouldn't say too much."

Mungo glared at the fat white bird. His meaning was, if you dare to keep talking like this again, I won't order your service next time!

Gulu realized that the rest of the birds should all be brought over by this fat white bird. Since Mungo's group ate a lot of fresh meat, they really liked picking teeth for his group.

Gulu rubbed Mungo and said, "You should let him talk. I want to talk to him."

The fat white bird: "Of course, Mungo is the favorite of all birds, because the meat eaten by him is the freshest, odorless and most delicious."

Gulu: "Then has your group been following Mungo?"

It seemed that Mungo's group was the big VIP customer of this bird group, very powerful!

The other birds ate meat quietly. When Gulu asked, only the fat white bird would answer, for fear that an extra word would upset Mungo.

Soon, they finished their service. They were quiet, fast and clean. It's really a five-star service.

Gulu had watched other birds picked Tyrannosaurus rex's teeth before. They were absolutely not this fast.

The fat white bird nodded to Mungo before flying away. Gulu thought that it meant: Big Lord (T/N: or Big Customer), remember to call us for orders next time.

Mungo opened his mouth. The fat white bird immediately grasped his meaning and left three birds behind to deeply clean his teeth.

Gulu felt that Mungo was saying, "Sister ah, add another order today for this lord."

The fat white bird left with his five-star service team only after Mungo's mouth was cleared of all leftover meat.

Mungo secretly took a deep breath with his back to Gulu to sniff himself. Gulu should like it.

Not long after, Gulu saw more than a dozen Alamosaurus and more than 20 Diplodocuses coming towards the forest here.

Alamosaurus was a very beautiful herbivorous dinosaur. It's very similar to Argentinosaurus. Its length was 28-30 meters and its weight could reach up to 73 tons. Its huge size determined the fact that it had to eat at least one ton of leaves every day.

Diplodocuses didn't appear small beside Alamosaurus because they also grew to 30 meters even though they weighed much less than Alamosaurus. That was because their skeletons were lighter and thinner. Yet, their overall volume still appeared large.

Gulu knew that this dozen of Alamosaurus only needed a few hours to eat up the entire forest, not to mention with the help of their Diplodocus brothers.

After these Diplodocuses and Alamosaurus began to eat leaves, Gulu saw the Argentinosaurus group coming up as well.

He seemed to feel that the forest was trembling with fear: Big bosses, if you want to eat me, don't come together. Please be merciful. Don't eat me too bald.

The Argentinosaurus and the Alamosaurus were both known as "forest clearing machines", that was to say, where these two dinosaurs appeared, the forest could disappear in minutes. They're much more powerful than "Bald-Head".

Gulu was lying at the edge of the forest. Even with naked eyes, he could see that the forest was becoming bald very quickly. Diplodocuses ate leaves. Argentinosaurus and Alamosaurus not only ate these leaves, but also stepped on the entire tree. They were really efficient "loggers".

These big dinosaurs ate and pulled. Fortunately, the huge excrements that they pulled down weren't very smelly.

But it made the feathered dinosaurs in the forest fled in four directions.

Gulu saw a large lump of excrement pulled down by a Diplodocus. Several Epidexipteryx ran right under it. Unfortunately, they were hit by the excrement and drowned.

All of the Epidexipteryx: I f**king never thought that I would drown and died in a pile of sh*t.

The average Diplodocus weighed no less than 30 tons and needed to pull a ton of excrement every day, not to mention Argentinosaurus and Alamosaurus.

Gulu saw a lot of dung beetles eating the excrements of these big dinosaurs. After tens of millions of years, these beetles would end up cleaning after the elephant dung on the African grassland. It could be said that they really had ways to live.

One Diplodocus stood closer to Gulu. He saw several Anurognathus on its back.

Anurognathus were mini pterosaurs. They fed on insects and parasites. They lived on Diplodocuses all their lives, fighting, breeding and foraging on them. Diplodocus weighed 150,000 times as much as them.

These Anurognathus were eating parasites and insects on Diplodocus.

Insects in ancient times were extremely large. They could also be collectively referred to as "prehistoric giants".

By the time he woke up in the afternoon, the entire forest had been eaten bare. The trees had also fallen down one after another.

However, these fallen trees would become nutrients for the forest. Those that hadn't fallen would soon grow leaves again.

Nevertheless, this forest appeared a little too miserable. Gulu seemed to hear it crying: "I told you not to eat me too bald! I hate you big dinosaurs! I condemn you!"

Mungo's group continued to move forward, but at a much slower pace.

In fact, Mungo could stop to wait for Pado's group, but he wasn't willing to because he wanted Gulu to stay in his group for a longer time. If he stopped to wait, Gulu would soon return to Pado's group.

Since many large trees had been trampled by the Argentinosaurus and Alamosaurus, Mungo's group had a more convenient time walking. They left the other end of the forest around evening.

After walking out of the forest, an endless fern plains stretched out.

All of a sudden, Gulu saw something running past them, or rather, a group of something.

The running speed of this group of things was really fast, so fast that he couldn't see clearly!

Gulu felt that only later cheetahs had this speed.

Gulu really couldn't think of any dinosaur that could run this fast.

At this moment Gaya suddenly shouted, "Guga is missing!"

Gulu realized immediately. Guga must have been taken away by that group of fast-moving things!

← BAD Chapter 73: The Tyrannosaurus rex's five-star service has been arranged (2) ← BAD Chapter 74: Your Good Friend 'The Best Polar Hunting Regiment' is Online (1)
%d bloggers like this: