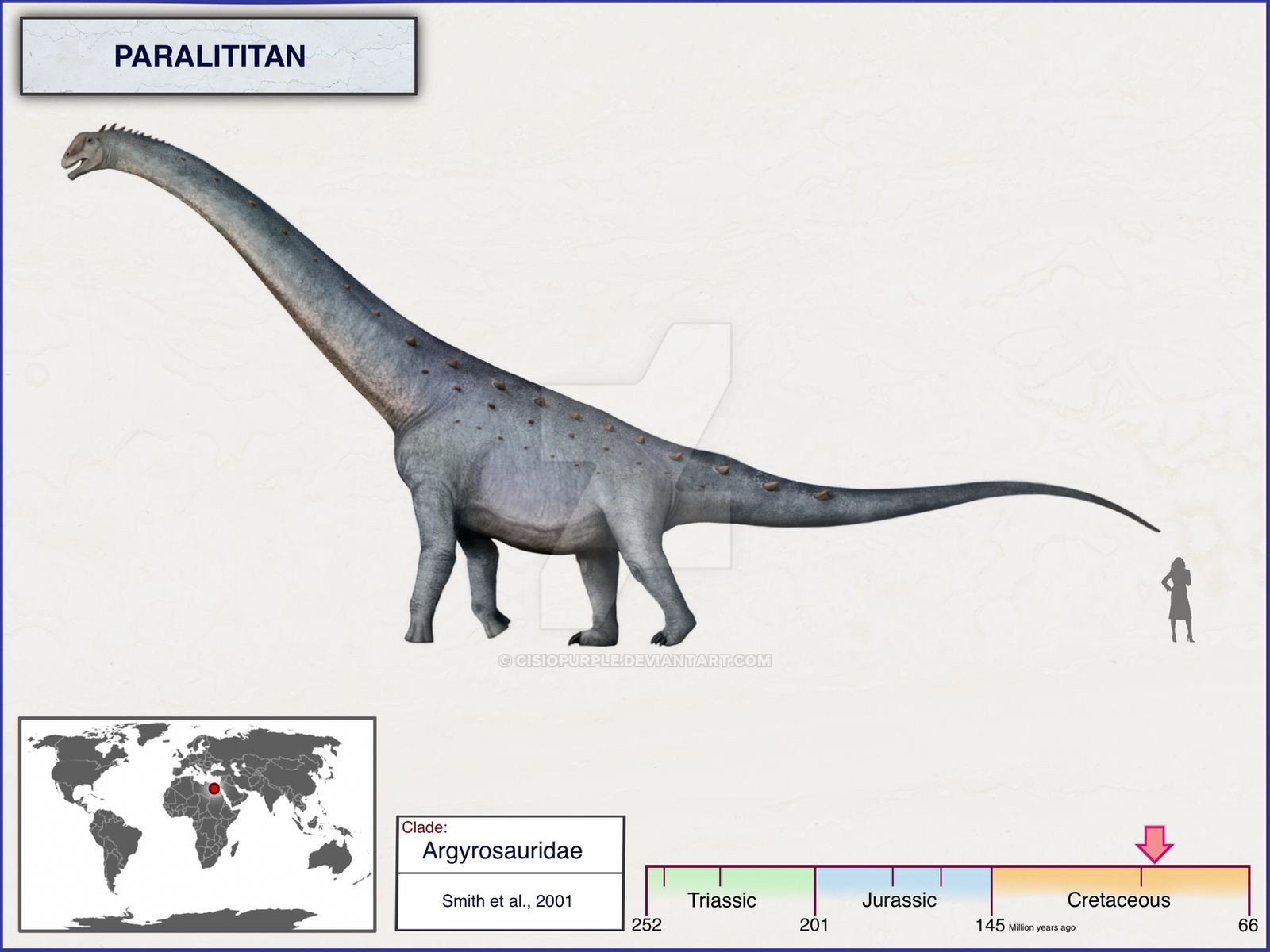 Sarcosuchus was an extremely scary prehistoric water giant that fed on dinosaurs. It was 12 meters long and weighed 8 tons.

Meanwhile, sawfish was a large freshwater shark that looked like a swordfish. It fed on dinosaurs and all kinds of big fish in the water. Its whole body was 8 meters long. Its huge mouth was 2.5 meters long and covered with barbs. It's undoubtedly one of the overlords in the water.

(T/N: the image is 7 meters, but some prehistoric sawfish may be able to grow up to 8 meters…?)

Gulu leaned lightly against Mungo as he ate ice-cold ferns while watching this super-exciting and bloody hunting drama.

Then the big villain boss was, of course, the water lord Sarcosuchus. The villain supporting role belonged to the sawfish.

There was a loud noise. The Sarcosuchus snapped one leg of the young Paralititan in an instant. The river by the bank turned red instantly.

No.2 villain sawfish was still hiding nearby. It was waiting for the big Sarcosuchus to drag the Paralititan underwater to eat, so it could go get a piece of pot. After all, there was more than 20 tons of this big guy. Even the large Sarcosuchus couldn't eat it all.

At this moment, a Spinosaurus swam not far away!

Gulu: F***, when the real boss comes, the Sarcosuchus can only stand aside.

The Spinosaurus was about 22 meters long and weighed up to 25 tons. It's a very terrible carnivorous dinosaur, also known as "Ares Spine"!

A Spinosaurus had many bones protruding from its back. These bones form a "hill" and looked like a "sail". A Spinosaurus also had a big head and sharp teeth.

It spent most of its time in the water. It fed on fish. During hot and dry weather, it basically stayed in the water without coming out.

Human beings couldn't help but compare any kind of powerful dinosaur with Tyrannosaurus rex. It's also right that Tyrannosaurus rex should always get shot while lying down. This was the so-called "if you want to wear the crown, you must bear its weight."

This round, sorry, Tyrannosaurus rex won.

Although a Spinosaurus's bite force couldn't be compared with Tyrannosaurus rex at all, it's more than enough for it to dominate in the water with its size and terrible teeth. Its position of "Boss" in the water was unshakable.

Gulu saw that after the Spinosaurus came, it took out the sawfish in one bite. The river became red for a long time.

Poor No.2 villain sawfish just got hung up like that.

Spinosaurus didn't like terrestrial dinosaurs very much. They preferred to hunt in the water. The big fish in the water was more to their liking.

The Sarcosuchus didn't give up hunting the Paralititan because of the arrival of the Boss. It still didn't let go, especially after it saw that the Boss had already started eating the sawfish. A sawfish was enough to fill the Boss's appetite.

Mungo could now understand many human words of Gulu. He knew what big movies meant. Jurassic Park was a series of dinosaur-themed movies shot by human beings, and frozen watermelons and so on.

Gulu felt that he was affected by Tutan. His mouth had become sweet, which wasn't bad.

While the Spinosaurus enjoyed a delicious sawfish, a Rugops waited not far away. It wasn't a predator but a scavenger dinosaur. It always picked up the leftovers from Spinosaurus.

Gulu didn't know how long the main character, the young Paralititan, could last. The biting force of a Sarcosuchus was also very frightening. If the leg of the Paralititan wasn't thick enough, it would have been bitten off already.

The Paralititan didn't give up hope of survival. He kept moving up the shore. With a weight of more than 20 tons, he dragged the Sarcosuchus out of the water.

At present, half of the body of the Sarcosuchus was in the water and half was on the shore. However, this terrifying creature, the Sarcosuchus, was very destructive even if it's completely ashore. Of course, it would have more advantages in the water, so it tried to drag the Paralititan into the water.

It was the so-called double whammy. The Paralititan's roar not only didn't find help but attracted a Carcharodontosaurus over.

A Carcharodontosaurus was 14 meters long and weighed about 10 tons. It had shark-like teeth, so it's also called shark-toothed dinosaur and was a very terrible terrestrial carnivore.

Gulu felt that the Carcharodontosaurus must be ranked as the "No.1 villain" of this Jurassic Park movie, with equal status to the Sarcosuchus.

Although a Spinosaurus was very powerful, it didn't attack the main character Paralititan after all. It could only be regarded as buying soy sauce in this big movie.

The Carcharodontosaurus came running fast and bit the neck of the young Paralititan.

In such a deadly tug-of-war game, there was only one winner.

Gulu saw the Carcharodontosaurus standing on the body of the Paralititan with its head held high and gave a loud roar, declaring its victory and absolute possession of its prey.

While the Carcharodontosaurus was celebrating its victory and "trample on" the Paralititan, Gulu saw an adult Paralititan came running nearby.

Gulu: The reinforcement has finally arrived!

A Carcharodontosaurus alone could kill a 20-ton young Paralititan, but it wasn't the opponent of a 70-ton adult Paralititan.

Gulu saw the young Paralititan's neck and legs were bleeding. He's very doubtful whether it could survive even if the big Paralititan saved it.

However, the young Paralititan had a strong desire to survive. When he looked at the adult Paralititan, his eyes were saying: Help me! Help me! I think I can make it!

The adult Paralititan came running and knocked the Carcharodontosaurus away.

The young Paralititan stood up from the ground. He followed behind the adult Paralititan and left the horrible river that nearly killed him after leaving a long trail of blood on the bank.

Gulu: I didn't expect him to survive like this! It's indeed a dinosaur with a protagonist halo!

The movie finally ended. The big movie had played all afternoon. At this time, the sun was already setting while the heat had faded. Gulu and Mungo also came out of the water and headed for the Triceratops group.

Gulu said along the way that today's big movie was really great, the ice-cold fern plants were really delicious, and Mungo was very strong.

Such days quickly passed. In a flash, three months went by.

These three months had been really hot. Gulu felt that if Mungo hadn't taken him to the river to soak in water every day, he would have become a dry Triceratops.

Gulu looked at these budding Triceratops cubs: Was I this adorable as a child? No wonder Mungo and Gaya like me so much.

Tutan's wounds completely healed. His forelimb now also scarred as badly as Paton's. Consequently, Gulu felt that they seemed even more like a cp. Simply standing together, he knew that they were a pair.

Gulu noticed that Tutan became more robust than before the fight with Pado.

However, Gulu also found that Tutan was "bald". Of course, it wasn't that kind of hair baldness, but the kind with bright white area on his head. It's probably because he hit Pado so hard that the cuticle hardened and couldn't grow back the normal color skin anymore.

Gulu: "Uncle Tutan, you tell me. If I become strong, will I also go bald?" (T/N: reference to One-Punch man lol)

Tutan felt a little strange. Since he doted on the three little ones, he answered, "I became stronger and got bald."

Gulu circled Tutan and explained to him what this meant. He happily poked fun at him.

Tutan was amused when he knew the meaning. He thought that Gulu was really cute.

Tutan told him very seriously, "Gulu, how can there be such a cute little Triceratops as you? You're so strong and interesting. Now that I'm your uncle, I'm so happy."

Gulu: "Uncle Tutan, you are really a rainbow fart maker."

Tutan and Gulu had lived together for such a long time. He knew what a rainbow fart maker meant. He felt very happy.

By this time, it's already late at night. Tutan and Gulu were chatting while getting ready for bed.

Gulu suddenly smelled the scent of thick smoke coming from the air. It was one that could only be produced by forest fires!

Many Triceratopses of the group had fallen asleep.

Pado, as the leader of the ethnic group, was very alert. Although he didn't know what had happened, he smelled the smoke and looked at the direction of the forest anxiously.

During the Cretaceous period, the climate was warm and dry. Forest fires occurred from time to time. Dinosaurs were used to them and knew that they should run to places with water in case of fire.

Gulu immediately raced to Pado's side and shouted as he sprinted there: "Pado, the forest fire is coming. Run! Run to Dada River! Tell everyone to run!"

Pado immediately let out a loud roar, then ran to the river with the group.

Pado's group had already started to run towards the river. Finally, the forest in the distance finally began to show flames.

The forest was so far away, yet the fire was so big. Such a big fire could burn the entire plains.

Gulu smelled the scorching scent of "roast meat" in the air. It must be from the burnt dinosaurs in the forest.

Pado's group was the first one to reach the river. When they arrived at the river, the fire had just burned through the forest and reached the fern plains.

Many dinosaurs who didn't escape in time was swallowed up by the fire. There were sad dinosaur roars everywhere.

Meanwhile, Pado's group looked at the dark and rippling Dada River but didn't dare to go down.

There're too many dangers in Dada River, especially at night. The first batch of herbivorous dinosaurs that went into the river will die the most terrible death. After they fed the predators in the river to full, the later ones wouldn't die as miserably.

Gulu wasn't even sure of his safety now, but he still worried about Mungo, Gaya, Guji and Gudong. He was afraid that they couldn't come out in time. He's very anxious.

While Pado's ethnic group hesitated to enter the river, more and more carnivorous dinosaurs were driven by the fire to the river.

In front of them was the dangerous Dada River, behind them were swarms of carnivorous dinosaurs and fires.